As the boiler steel pipe used in thermal power plant, P91 steel pipe has good high temperature durability, creep resistance and impact toughness, excellent welding performance and process performance, strong oxidation resistance and high temperature steam corrosion resistance, low coefficient of thermal expansion, good thermal conductivity and structural stability, and excellent comprehensive performance [1]. If the hardness of P91 steel pipe is low, it will lead to insufficient durable strength, which will directly affect the service life of the pipe and the safety of unit operation. In the process of on-site inspection, it is found that there is decarburization layer on the outer surface of P91 steel pipe, which leads to the low hardness test value. If the correct comprehensive inspection is not carried out and the waste is judged directly, it is easy to lead to misjudgment and great economic loss. Combined with the test results of P91 steel pipe with low hardness in the past two years, this paper analyzes the phenomenon of low surface hardness of P91 steel pipe found in the maintenance process of supercritical unit in a power plant, so as to prevent the occurrence of misjudgment and unnecessary economic loss.

During the overhaul of a supercritical unit, during the hardness test of the main steam pipeline, it was found that the hardness of a straight P91 pipe with an inner diameter of 273 mm and a wall thickness of 30 mm was lower than “DL/T 438—2009 Metal Technical Supervision for Thermal Power Plants” Regulations”[2] require values. The inspection was carried out in accordance with “GB/T17394-1998 Metal Leeb Hardness Test Method” [3]. Three different types of Leeb hardness testers were used to test the three sections of the steel pipe in different directions. The test values are shown in Table 1. The data in Table 1 shows that the data obtained by different hardness testers on different cross-sections and different directions of the steel pipe have uniform values and small dispersion. According to DL/T 438-2009, the Brinell hardness value of P91 steel pipe should range from 180 to 250 [2], so it is preliminarily determined that the hardness value of this steel pipe is lower than the standard value.

The chemical composition analysis of the above-mentioned pipes with low hardness values is carried out. The analysis data is shown in Table 2. It can be seen from the data in the table that the mass fractions of the chemical elements in the chemical composition of the steel pipe meet the standard requirements of “ASTM 335/335M—2010 Standard Specification for Seamless Ferritic Alloy-Steel Pipe For High-Temperature Service” [4], and there is no abnormality. 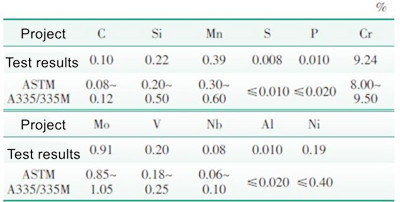 The steel pipe was sampled along the cross section, polished and corroded, and tested radially from the outer surface inward using the Wilson TUKON2500 automatic Vickers hardness tester. The test data is shown in Figure 1.

(1) In the process of steel heating or heat preservation, due to the effect of the surrounding oxidizing atmosphere, the surface of the steel will be decarburized, causing the surface carbon mass fraction to decrease. The chemical reaction formula is as follows:

(2) The factors that affect steel decarburization include the chemical composition of the steel material, heating temperature, holding time and gas composition. Decarburization of the steel surface will greatly reduce the surface hardness of the material [5, 6].
(3) During the production and processing of steel pipes, the decarburized layer will be used as a surface defect to remove the machining allowance. However, if the design of the machining allowance is insufficient, the surface decarburization layer may remain and affect the surface mechanical properties. Combined with the Vickers hardness test data, it is determined that the depth of the decarburized layer of the steel pipe is about 1.7 mm.
In summary, the hardness of the P91 steel pipe matrix meets the standard, but due to the presence of a decarburized layer on the surface, the test result is lower than the standard value.

During the nearly 2 years of inspection, there are 19 P91 steel pipes with hardness values lower than the standard value, as shown in Table 4. Metallographic inspection was done on each steel pipe, and it was found that there was a ferrite structure. Re-grind each steel pipe. According to different steel pipe wall thickness, the thickness is 1.5~2.2mm, and the thickness is polished in several times, each time is about 0.5 mm; each time it is polished, a hardness test is performed. The result is that the hardness value of the pipeline increases with the increase of the polishing depth. After polishing to a certain depth, the hardness value meets the standard requirements, and the ferrite structure disappears.
Table 4 Test results of P91 steel pipe with hardness value lower than standard value 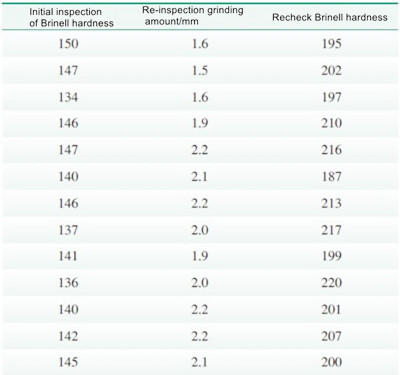