Analysis of the installation case of spiral wound gaskets

Analysis of the installation case of spiral wound gaskets

Large diameter spiral wound gaskets are key sealing elements for heat exchanger channel flanges. In order to minimize seal failure at the heat exchanger channel flange, it is important to properly install the spiral wound gasket and apply the correct bolt tightening sequence and proper tightening torque.
1 Question raised
An industrial refrigeration project exported to Kazakhstan, the U-tube heat exchanger, according to GB 151 for the heat exchanger, its model is BIU1500-8.3/2.07-1142-7/19-2 (As shown in Figure 1), the design pressure is 8.3 MPa, the hydraulic pressure test pressure is 10.8 MPa; the full thread bolt is M64×3, the length is L=880 mm, the material is SA-320 L7, the number is 46; The material is SA-194 Gr.4; the gasket used on both sides of the tube sheet is a spiral wound gasket with an inner ring. During the hydraulic test, when the pressure rises to 8.5 MPa, the upper part of the pipe flange is leaked, and after the bolt tightening torque is increased to 9 500 N·m by the torque multiplier, it still leaks. Later, the bolts that loosened the position of the leak were loosened, and then the bolts at the leak and the loose bolts were retightened to re-test the hydraulics. As the test pressure continues to rise, leakage begins to occur at the lowest position of the flange of the pipe box, and there is a tendency to increase gradually, and a small amount of stainless steel metal strip is found to be squeezed from the lowest point of the pipe flange, and As the pressure inside the pipe box rises, the stainless steel metal strip is extruded more and more, and the leakage is also getting larger.

Fig.1 U-tube exchange
2 Removal of the tube box assembly and tube bundle assembly
The leak occurred in the flange of the pipe flange and the spiral wound gasket was damaged, so it was decided to remove the tube box assembly. Since the nominal diameter of the bolts of the pipe flange is M64×3, the tightening torque of some bolts also reaches 9 500 N·m, and the bolt removal torque is about 1.5~2.0 times of the tightening torque, so the pipe box assembly removal belt It has come a lot of difficulty. Because there is no suitable tool available, I have to use the wrench sleeve, the big hammer and the hoist to pull the wrench. After three days of unremitting efforts, there are still two bolts that can’t be removed. Finally, I have to use the gas cutter. The bolts are cut off and the tube box assembly is removed.
After the lower tube box assembly was disassembled, it was found that the wound portion of the spiral wound gasket had all fallen off, only the inner metal ring was left, and the metal strip of the intermediate winding partition of the spiral wound gasket was distorted, as shown in Fig. 2. 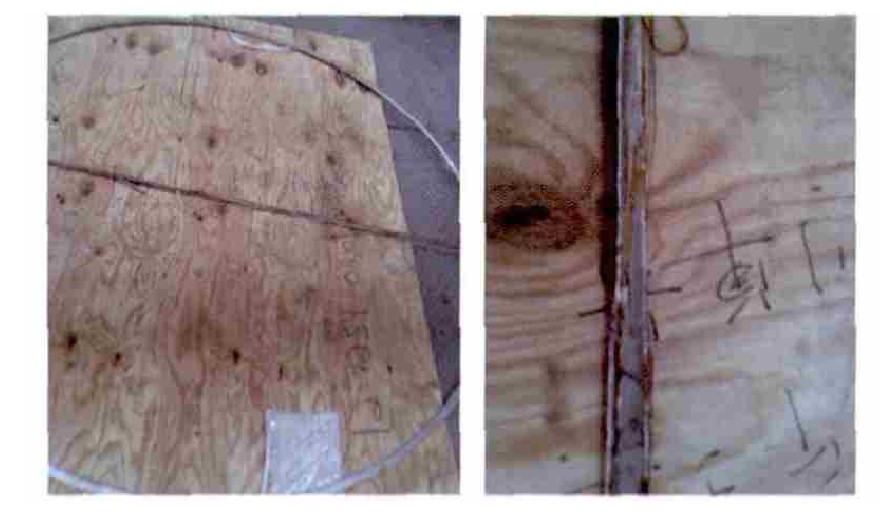 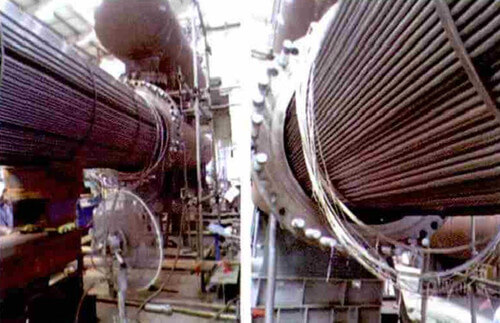 Therefore, how to ensure that the metal-wound gasket does not shift during the installation process and the bolt pre-tightening force control is the key to avoid seal leakage.
4 Program development
The structure of the flat-top tube box of a manufacturer’s dry evaporator consists of two elastic cylindrical pins, which are composed of a cylinder section, a gasket and a flat cover. The two elastic cylindrical pins are used to place the gasket and the barrel and the tube. The plate is positioned and the tube box assembly is secured to the tube sheet by bolts. Therefore, the solution is to use the elastic cylindrical pin to fix the spiral wound gasket on the flange or the tube plate, so that the spiral wound gasket will not be misaligned and displaced. The specific method is as follows:
First, drill four uniform positioning holes with a diameter of 3.2 mm on the inner ring of the spiral wound gasket. The opening has no effect on the strength. Secondly, the four positioning holes are matched with the pipe flange. This reduces the adverse effect of the vibration on the spiral wound gasket during drilling, and the drilling also avoids drilling errors and leads to inaccurate assembly.
5 Program implementation
First, clean the flange sealing surface, and pre-assemble the winding gasket of the unwrapped plastic packaging tape with the pipe flange to ensure that the gasket is properly seated, and the stainless steel inner ring and tube of the spiral wound gasket The box flange is equipped with the above four uniformly distributed positioning holes. Then, carefully remove the plastic wrap from the metal-wound gasket and inspect the gasket surface for defects such as radial scratches. Finally, the spiral wound gasket is fixed to the pipe flange by the elastic cylindrical pin, and then the pipe box assembly and the pipe plate are assembled.
6 Tube box installation
After the tube box assembly is assembled with the tube sheet, the following key processes play a key role in sealing.