Now in order to enhance the influence of their products, beer production enterprises are constantly strengthening the control and management level of internal production process, one of which is to vigorously promote cleaner production. The promotion of draft beer makes all human beings realize the importance of microbial management. So where does microbial pollution come from? Many people can accurately answer, water, CO2/N2, compressed air, production equipment, filling environment. Yes, these are the big aspects. Each aspect can be decomposed to a point according to its specific application. What we need to examine here is the production equipment.

What are the main production equipment of brewery?

Can body, pipeline (filter, etc.) can be regarded as a fine combination of the two. At present, CIP is the best way to clean the tank and pipeline. For example, CIP cleaning measures for water supply pipeline（ Water is the raw material of beer production, and also the main cleaning medium. After a period of use, a layer of slime and slippery substance grows on the surface of general water pipes. If it is used longer, a layer of sediment will be deposited, which contains a large number of various microorganisms.) CIP has very high requirements on the material and inner surface of fermentation tank, sake tank, yeast storage tank, yeast expansion tank and their connecting pipes, such as stainless steel material, polishing treatment with an accuracy of 0.2 micron on the inner surface, etc. In addition, in order to achieve the purpose of cleaning, we should pay attention to that if the fermentor is washed, its supply pipe must be the same or larger than the diameter of the washer, and ensure the four conditions of flow rate, flow rate, temperature, concentration and time, etc. But for most people, a small detail that is easy to be ignored is the management and control of sampling valve.
The structure of aseptic sampling valve mainly includes sealant sleeve, sample chamber, sampling port, stainless steel thimble, spring, thimble sleeve and manual handle (the difference between automatic aseptic sampling valve and manual valve is whether pneumatic device is used, and its basic principle is the same. Under normal conditions, aseptic sampling valve is equipped with sampling port head of appropriate size), etc. (as shown in Figure 1). 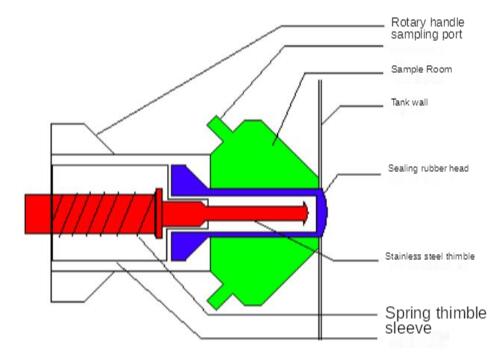 Its basic working principle is that when it is in the closed state, the thimble is pushed by the spring tension or other pressure, and the thimble presses the sealant head on the opening of the tank wall to achieve the sealing effect; If sampling is needed, steam or other bactericidal medium is introduced from one (generally the lower) sampling port to fill the whole sample chamber and lead it out from the other sampling port. After a certain period of time, the sample chamber and sampling port are in a sterile state; Then, by twisting the handle, shrinking the spring and loosening the thimble, the sealant head is separated from the opening on the tank wall, so that the sample flows out from the tank through the sample chamber and is collected from the sampling port; After sampling, screw the handle, relax the spring, and press the sealant head on the opening of the tank wall again through the thimble; Inject clean water to discharge the residual liquid in the sample room (if the sample is sterile water or other clean medium, this step can be omitted), and then inject sterilization medium for sealing and retention, waiting for the next sampling.
The application points of aseptic sampling valve include cold wort, fermentation broth, yeast mud, deoxygenated water, sake (the basic principle and structure of continuous sampler used after membrane filtration in pure raw production are the same as others), aseptic water, etc. From the above-mentioned use principle, it should be said that under the normal use and maintenance conditions, the use of a large number of special sterile sampling valves in the production site is undoubtedly one of the effective means to improve the microbial management and control level. However, there are still some shortcomings in clearly understanding the function and influence of aseptic sampling valve as well as its use and maintenance. It can improve the accuracy of sample sampling and make a comprehensive understanding of sample properties, but it will also affect the judgment of results due to the contamination of samples caused by careless operation, Even due to the lack of maintenance and management, the overall pollution of the sampled medium will be caused. Now we will give some examples and analyze the cases we have met.

The application in pipeline.

Taking the sterile sampling valve installed on the wort pipeline as an example, in the early stage, the first batch of wort after CIP in the pipeline was found to be contaminated during microbial detection, but the second and third batches were not; Moreover, the temperature of top water is higher than 85 ℃. All pipes should be made of stainless steel, and there is no dead angle in the whole process; The compressed air for oxygenation is also sterile after being filtered by sterile membrane. This raises the question: where do the microbes come from?
After analysis, the suspect was placed on the sterile sampling valve. Wort, as an eutrophic substrate for yeast growth, has relatively high sugar content. When sampling, wort flows through the openings on the tube wall, the sample chamber and the sampling port. When cleaning after sampling, the residues in the sample chamber and the sampling port can be easily removed, but the contact part between the sealant head and the tube wall is not easy to be removed, When the next sample is taken for sterilization, it will be more difficult to remove the sticky when heated. After a long time, it will form a sanitary dead corner. The above suspicions were confirmed by the findings of disassembly inspection of sterile sampling valve. Therefore, the following transformation has been adopted.
Reset the procedure, requiring that each time CIP is carried out in the pipeline, the aseptic sampling valve will be automatically opened for synchronous CIP, and the aseptic sampling valve will also be automatically opened for re sterilization when each batch of wort is fed into the top hot water tank. Finally, connect the steam pipe before sampling for high heat and long time sterilization (as shown in Figure 2). The results showed that the method was effective and the microbial detection result of wort was zero.

The application in the tank.

In brewing production enterprises, more tanks are involved, such as fermentation tank, sake tank, yeast storage tank, yeast expansion tank and CIP system. Due to the need of sanitation, the inner surfaces of sake can, yeast storage can and yeast expansion can have been polished with an accuracy of 0.2 micron. The whole tank is cleaned by the flow of CIP cleaning fluid, except that the liquid level is about 1-2 meters up and down and the washing ball is facing the position. CIP cleaning solution and return pipeline must have the same pipe diameter as the material being cleaned. If the fermentor is washed, the diameter of its supply pipe must be the same or larger than that of the washer, and the four conditions of flow rate, flow rate, temperature, concentration and time must be ensured to achieve the purpose of cleaning.
Then, after the well-designed CIP of the whole tank system, is there no sanitary dead angle? The answer is No. It is because of CIP liquid flow cleaning characteristics that there is no mechanical impact on the stains in the middle and lower part of the tank, especially the stains in the gap, which affects the cleaning effect. According to the results of actual inspection and observation, if the aseptic sampling valve installed at the lower part of the tank (about 1/5 from the bottom of the tank) is deformed or cracked, it is easy to accumulate stains, as shown in Figures 4, 5 and 6, Even microbial accumulation caused wine pollution.

Fig. 7 inner wall of rubber head of sterile sampling valve
If there is no aseptic sampling valve installed on the tank, but only the common handle sampling valve, a hard plastic pipe can be connected from the CIP supply pipe, and the semi-automatic cleaning process can be established by opening the handle during CIP, so as to achieve the purpose of removing sanitary dead angle and controlling pollution.

The specific form of application is automatic continuous sampler, which is also a kind of pipeline application. Another important purpose of this paper is to provide an idea for analyzing the secondary pollution sources of draft beer. The basic appearance of the disassembled continuous sampling valve is shown in Figure 8.

Fig. 9 broken sealant head of continuous sampling valve
As a key part in the production of draft beer, the membrane filtration system is responsible for providing sake without any pollution microorganisms for filling. In order to ensure the sterility of sake, in addition to the parameter requirements of filtration membrane, the requirements of airtightness and automatic control are also considered in the design of the system. The discovery of the problem is that there is a small amount of liquor in the sealing cover of the sampling port during the production of ordinary beer. The first suspect is that there is a fault in the automatic control program, but the continuous tracking results show that there is no problem. Then the liquor was compared and analyzed, and the results showed that there were bacteria in the liquor. After the valve is disassembled, it is found that the sealant head is damaged as shown in Figure 9, and a layer of dirt is attached to the inner wall of the sealant head. After the sealant head is replaced, the above situation no longer occurs.
From the situation reflected by the above processes, we must pay attention to the influence of some minor details in daily production. The aseptic sampling valve is reasonable in design, but it still needs careful management and maintenance. There are also two problems that should be paid attention to:
1. When the sterile sampling valve is used for sampling, if the handle is often used for opening, the rubber head will be damaged due to the friction between the sealant head and the tank/pipe wall;
2. If high temperature steam is often used to sterilize the aseptic sampling valve, it is also easy to cause accelerated aging and damage of the rubber head (the specific aging schedule is not available, but from the situation of the sampling valve that we found problems, we basically focus on these two cases). Only under the support of regular inspection and maintenance, the aseptic control level of our production will be further improved.