According to Article 8.1 of GB150.4-2011, when the steel plate cold forming pressure components meet any of the following a) – e) conditions and the deformation rate exceeds the range in Table 4, corresponding heat treatment shall be carried out after forming to restore the material properties.

8.1.1 When the cold formed steel plate pressure element meets any of the following conditions (a)~e) and the deformation rate exceeds the range in Table 4, corresponding heat treatment shall be carried out after forming to restore the material properties.

b) Vessels with stress corrosion indicated in the drawing;

c) For carbon steel and low alloy steel, the thickness before forming is greater than 16 mm;

d) For carbon steel and low alloy steel, the thinning amount after forming is greater than 10%;

The deformation rate control indexes of cold formed parts are as follows:

5% for carbon steel, low alloy steel and other materials, and 15% for austenitic stainless steel. In the remarks, when the design temperature is lower than – 100 ° C or higher than 675 ° C, the deformation rate control value is 10%.
The specification provides illustrations for the barrel and head. 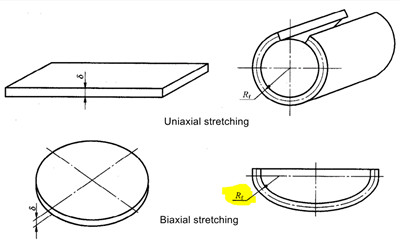 How to calculate the deformation rate of each component?

Deformation rate, also known as extreme fiber elongation. For the cylinder, it is unidirectional tension, and the formula is:

10.4.2 The cold formed or medium temperature formed pressure components that meet one of the following conditions shall be heat treated after forming.

10.4.2.1 The thickness of round steel is 8, which meets the following conditions:

The thickness of carbon steel and 16MnR shall not be less than 3% of cylinder inner diameter D;

The thickness of other low alloy steels shall not be less than 2.5% of the inner diameter D of the cylinder.

According to GB150-2011, it is uniformly changed to 5%, and the post forming heat treatment is required only when other requirements are matched. Relatively speaking, the standard requirements are more relaxed.

Elliptical head is a biaxial stretching element, so it is calculated according to the following formula:

Ro is infinite, so the key point is the calculation of Rf.
The source of Rf of elliptical head is mainly approximate ellipse drawing method and four center method. 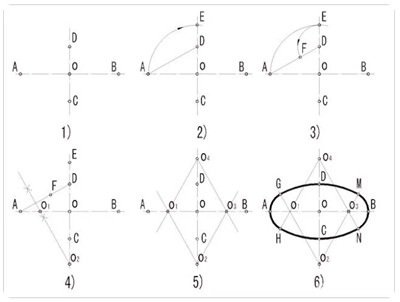 In ASME VIII I, UG32, for standard elliptical heads, the radii of small arcs and large arcs obtained by four center method are 0.17D and 0.90D respectively:

An acceptable approximation ofa 2:1 ellipsoidal head is one with a knuckle radius of 0.17D and a spherical radius of 0.90D.

The derivation process can refer to:

For the rest of dished heads, spherical heads, conical heads, Rf is easy to determine, and no examples will be given.

In ASME VIII I, Table UG79-1, in addition to unidirectional and bidirectional stretching, the formula for calculating the deformation rate of heat exchange pipe bends and elbows is also given. 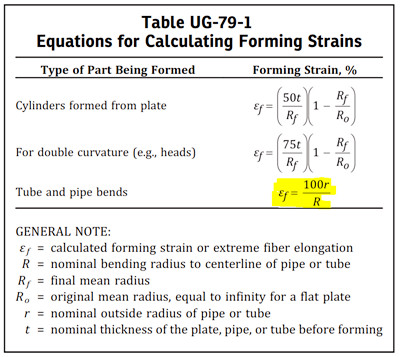 When stress corrosion resistance is required or residual stress is required to be eliminated, carbon steel and low alloy steel U-shaped heat exchange pipe bends and straight pipe sections of at least 150mm shall be subject to heat treatment. The reason for the hot spot of U-shaped heat exchange pipe bend section made of other materials shall be negotiated by the Supplier and the Demander.

However, the deformation rate formula of elbow is not available in GB150 for the time being, so we can consider referring to the old specification or other specifications.

In the corresponding chapters of ASME, UG-79, UCS-79, UHA-44, UNF-79 and UHT-79, there are heat treatment requirements for the forming of pressure parts of various materials and components, which are different from GB and can be used as a reference for designing similar equipment.
For example, for the most widely used carbon steel, according to UCS-79:
For P-No 1 material (SA-516 70) cold formed or cold bent elbows and heat exchange tubes, with a thickness of no more than 19mm, do not need post forming heat treatment. That is, common carbon steel heat exchange tubes do not need to consider forming heat treatment. For example, if the fiber elongation is greater than 40%, forming heat treatment is required. Of course, it is difficult to reach 40% in general.

(1) Cold- formed and bent P-No.1 pipe and tube ma-terial having a nominal thickness not greater than /4 in. (19 mm) does not require post-forming heat treatment.

When the deformation rate is greater than 5% and the forming temperature is between 120-480 ° C, post forming heat treatment is required:

(-b) The material is not exempt from impact test-ing by the rules of this Division, or impact testing is re-quired by the material specification.

(-d) The reduction by cold forming from the nom-inal thickness is more than 1 0% at any location where the extreme fiber elongation exceeds 5%.

The corresponding standard definition of GB150 and the description of warm forming:

In the process of a foreign project, the overall equipment is designed according to ASME, but the owner is from Europe. There are engineering regulations in the project that the deformation rate needs to be calculated according to EN13445.4, and it is stipulated that all carbon steel equipment with a deformation rate of more than 5% needs heat treatment.
At the beginning, it did not cause vigilance. It was designed, ordered and manufactured according to ASME requirements.
It was not until the Employer’s Engineer requested one day to submit the calculation sheet of fiber elongation according to the requirements of the project regulations that it was found that:
All carbon steel heads need post forming heat treatment.
The calculation formula of EN13445 is as follows, and the diameter ratio before and after forming is logarithmic:

In fact, it can be seen from the formula that the head is thick wall and thin wall, even if the head thickness is 0, the formula is simplified as:

Therefore, no convex head can be spared.
After discussion with the Owner, considering that heat treatment is not required in ASME and GB codes, this article has no impact on safety. In addition, some heads have been bought back and welded with the cylinder, whether it can be omitted.

It was ruthlessly rejected by the owner.