Can globe valve and gate valve be mixed?

Can globe valve and gate valve be mixed?

What’s the difference between globe valve and gate valve?

The structure of gate valve will be more complex than (globe valve) stop valve. From the appearance, under the same caliber, gate valve is higher than stop valve, and stop valve is longer than gate valve. In addition, gate valves are divided into open stem and concealed stem. Stop valve not available. 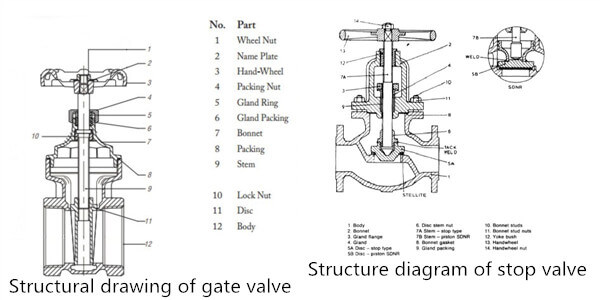 In addition, the gate valve only has two states of full open or full close, the stroke of gate opening and closing is very large, and the opening and closing time is long. The movement stroke of the valve plate of the stop valve is much smaller, and the valve plate of the stop valve can be stopped at a certain place during the movement for flow regulation. The gate valve can only be used for truncation without other functions.

Stop valve can be used for cut-off and flow regulation. The flow resistance of the stop valve is relatively large, and it is laborious to open and close. However, the distance between the valve plate and the sealing surface is short, so the opening and closing stroke is short.

Because the gate valve can only be fully opened and closed, when it is fully opened, the medium flow resistance in the valve channel is almost 0, so it is very labor-saving to open and close the gate valve, but the distance between the gate and the sealing surface is far, and the opening and closing time is long. 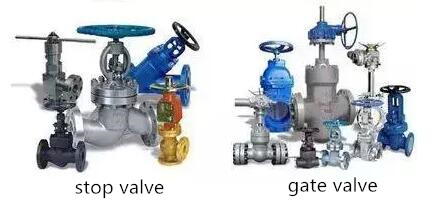 The flow direction of gate valve has the same effect in both directions. There is no requirement for the installation of inlet and outlet direction, and the medium can flow in two directions. The stop valve should be installed in strict accordance with the direction indicated by the arrow of the valve body. There is a clear regulation on the direction of the inlet and outlet of the stop valve. According to the “three chemical supplies” of China’s valves, the flow direction of the stop valve should be from top to bottom.
The cut-off valve is low inlet and high outlet. From the appearance, it is obvious that the pipeline is not on the same phase horizontal line. The gate valve flow path is on a horizontal line. The stroke of gate valve is larger than that of stop valve.
From the perspective of flow resistance, when fully open, the flow resistance of gate valve is small and that of load check valve is large. The flow resistance coefficient of ordinary gate valve is about 0.08 ~ 0.12, the opening and closing force is small, and the medium can flow in two directions. The flow resistance of the common cut-off valve is 3-5 times that of the gate valve (public number: Pump housekeeper). When the valve is opened and closed, it needs to be forced to close to achieve the sealing. The valve element of the stop valve contacts the sealing surface only when it is completely closed, so the wear of the sealing surface is very small. Because the main flow force is large, the stop valve with actuator should pay attention to the adjustment of the torque control mechanism.
There are two ways to install the stop valve. One is that the medium can enter from the bottom of the valve core. The advantage is that the packing is not under pressure when the valve is closed, which can extend the service life of the packing, and the packing can be replaced when the pipeline in front of the valve is under pressure. The disadvantage is that the driving torque of the valve is large, which is about 1 times of the upper flow. The axial force on the valve rod is large, and the valve rod is subject to large axial force Easy to bend.
Therefore, this method is generally only applicable to small caliber stop valves (below DN50), and stop valves above DN200 adopt the way of medium flowing in from above. (electric stop valve generally adopts the way of medium entering from above.) The disadvantage of media entry from the top is just the opposite of that from the bottom.