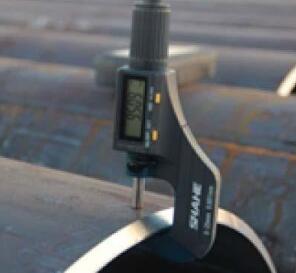 The figure above shows us measuring the thickness of steel pipe. 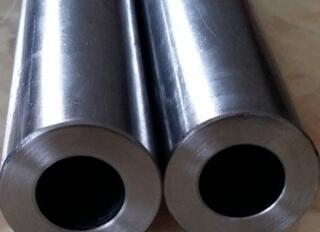 The figure above shows the finish rolled steel pipe produced by our company. If you look carefully, you can still see a little eccentricity. 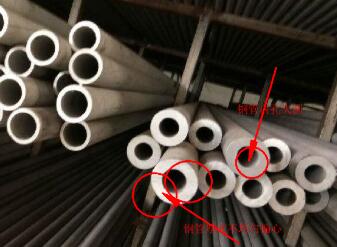 The figure above shows that seamless steel pipes produced by other steel pipe plants have obvious eccentricity and out of roundness.

The figure above shows the site of seamless steel pipe perforation. The eccentricity of many steel pipes is caused at this time, so it is very important to strictly control this perforation link.
Eccentricity of finish rolled steel pipe and cold drawn steel pipe will also occur due to perforation:
Any factor that destroys the geometric correctness of the deformation zone formed by roll, plug and guide plate will aggravate the uneven thickness of capillary wall.
(1) Head.

(4) Centering and heating of tube blank.
Eccentric centering hole and uneven heating (internal and external surfaces) will cause uneven wall thickness.
(5) Rigidity, structure and adjustment of piercer.
The rigidity of the piercer body is not enough, and the locking mechanism on it is unreliable; The centering device of the ejector rod is not adjusted accurately, the operation is unreliable and far from the fuselage; The adjustment of the rolling center line is generally lower than the center line of the rolling mill, which aims to improve the stability of the rolled piece. If the adjustment is too large, the relative relationship between tools in the deformation area will change asymmetrically after the rolling line moves down, which will also affect the uneven wall thickness of the capillary.
Summary:
To sum up, there is no way to completely avoid the uneven eccentric thickness of seamless steel pipe, which can only be strictly controlled step by step and minimized. If you have any ideas about our analysis, please leave us a message for discussion.