Design of half pipe jacket in cooling device of stirred reactor

Design of half pipe jacket in cooling device of stirred reactor

What is a half pipe jacket? 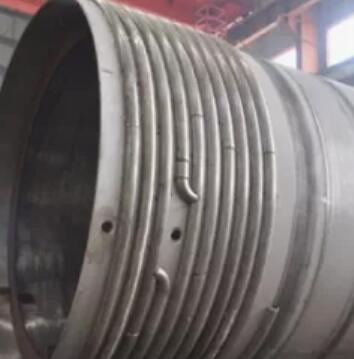 Technology of half pipe jacket

Structure of half pipe jacket

The working process of the half pipe machine mainly includes four steps. The metal belt is placed in the belt material support device, and then enters the half pipe rolling device through the lead-in device. Finally, the rolling is completed, and the half pipe is output through the output idler. The specific explanation is as follows:
One end of the belt material support device is used to place rolled metal belt material, which can rotate around a central axis and be continuously input into the rolling device. The belt material introduction device is mainly used to adjust the direction of belt material introduction, so that the belt material can not deviate from the direction of introduction and can be introduced between the primary molding rollers.
The inner part of the half pipe rolling device includes cycloid reducer, multiple sets of transmission gears, multiple sets of rolling roller components, box and moving cam, etc., which is mainly used for half pipe forming. The concave wheel in the device is coaxial and driven by the motor together with the main gear. The motor speed is constant, and then it is driven by a plurality of guide gears. The passive gear matching with the driving gear and the concave wheel coaxial with it will also run in the same direction at the same speed, so the cam matching with the concave wheel is also driven. In this way, with the rotation of the concave cam, the half tube sandwiched between them will be transported forward at a uniform speed and bent in sequence under the action of the multi-stage roller group, and finally gradually rolled out from the metal belt to the half tube, as shown in Figure L. It is mentioned in Section 1 that the required section of the half pipe is semicircle shape, so the change from the flat plate of raw material to semicircle section is not completed at one time. It needs to be rolled and deformed step by step, and the last rolling wheel group is most likely to finish the section.
The arc radius of the cam is gradually reduced and tends to the inner diameter of the half pipe until it is equal to the inner diameter of the half pipe. Similarly, the arc radius of the concave arc is also gradually reduced, but the difference is that it tends to the outer diameter of the half pipe. When the rolling roll group is running, the gap between the concave wheel and the cam should match the thickness of the metal strip.
The limiting device is arranged on the cam to ensure that the arc length of the convex surface is equal to the circumference of the semicircular section formed by the strip during the forming and rolling of the half pipe. In addition, the limiting device can also play the role of fixing the belt material, so as to avoid the belt material moving up and down in the molding process, and its size is gradually smaller. The clearance between the concave and convex wheels is adjustable, and the movement of the cam can guide the belt conveying direction.
The outer wall of the agitated reactor body is also circular. In order to make the half pipe wrap around the outer wall of the reactor body well, it is necessary to make the inner diameter of the extruded half pipe ring equal to that of the outer wall of the reactor body. Therefore, the center position between the cam and the concave wheel of the last rolling roller group is staggered by a certain distance a, as shown in Fig. 2, the eccentric pressing is carried out, and the half pipe can have a longitudinal direction when pressing the half pipe In this way, after the rolling of the concave convex wheel group, a half tube with a certain bending radian will be formed.
In order to better match the outer wall of different reactors, it is necessary to consider that the inner diameter of the half pipe bending into an arc is adjustable, so the movable adjustable devices are installed on the concave wheel and cam of the last stage. A movable adjustable device mounted on the concave wheel is used to change a In addition, the movable adjustable device installed on the cam is used to change the gap between the concave and convex wheels, which should be adjusted with the concave wheel adjustable device. Similarly, the size of a is inversely proportional to the gap between the concave and convex wheels, and the larger a is, the smaller the gap between them is. After mastering the relationship between the two adjustable mobile devices, it can be adjusted according to the actual situation until the gap between the concave cams is just the thickness of the metal material. In Section 1, it is introduced that the half pipe on the outer wall of the kettle body should be spirally encircled, which requires two other mobile adjustment devices to adjust the two ends of the concave wheel and camshaft, so that the shaft has a certain inclination, and then after repeated adjustment to get a suitable angle, the spiral encircling half pipe can be completed.
According to the design points, the relevant parameters are designed, and then the rolling device is used for half pipe production. This method not only saves materials, but also improves the production efficiency, which is of great benefit to cost saving and company benefit. This method is suitable for promotion.

If you want to have more information about the article or you want to share your opinion with us, contact us at s[email protected]