Designs and Uses of Ball Valves for Submarine Pipelines (2)

Designs and Uses of Ball Valves for Submarine Pipelines (2)

2018-01-17
C. The diver operation
When the water is not deep, the valve of the submarine pipeline is usually equipped with a hand wheel. Divers can operate the valve of the submarine pipeline by the air diving method. In addition, for submarine valves with ROV interfaces, divers can also use special operating tools to operate the submarine valve by the saturation diving method if the condition permits.
Designs of ball valves of submarine pipelines
A. The main technical indicators
Service lives, design temperature, design pressure, forms of ball valves, design standards, valve sizes, pressure ratings, materials of valve bodies, materials of valve balls, ROV interface levels, ROV interface modes, ROV interface standards and valve manufacturing grades should be taken into account when design ball valves. In addition, we should also pay attention to forms of valve bases, testing scopes and contents from the third party as well as high-pressure tank testing of valves and actuators. There should be a technical clarification between the buyer and the supplier, and the buyer needs to know technical details so as to prevent unnecessary modification of the contract.
B. Connection ends
Connection ends of ball valves include flanged connection ends and butt welded connection ends two kinds. 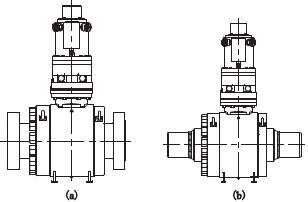