The composition of the 2205 duplex stainless steel used in the experiment is shown in Table 1. After cutting the 2205 wire to a 10mm×10mm×5mm block shape, it was solution treated at 1050°C for 0.5h, and then water quenched. The samples after solution treatment were aged (sensitized) at 650°C for 0.5, 8, and 100 hours, respectively.
Tab.1 Chemical composition of DSS2205 steel experimental samples(wt%)

The double-ring potential dynamic reactivation method (DL-EPR) is used to characterize the intergranular corrosion performance. The test is divided into three steps:

Figure 1 shows the XRD diffraction pattern of DSS2205 duplex stainless steel aged at 650℃ for different times. It can be seen from the figure that after the sample is aged for 8 hours, other diffraction peaks other than ferrite and austenite are still not observed on the XRD diffraction pattern, and the weak characteristic peak of σ phase is not observed until 100 hours of aging. This is mainly due to the small number of precipitated phases at this temperature and the insufficient detection sensitivity of the instrument. Correspondingly, as the aging time increases, the peak value of the characteristic peak of the austenite phase increases, while the peak value of the characteristic peak of the ferrite phase decreases. This shows that after the sensitization treatment of DSS2205 duplex stainless steel, the ferrite phase has undergone an obvious eutectoid transformation (δ→σ+γ2 and δ→σ+Cr2N) [5-6].
Figure 2 shows the microscopic morphology of a series of samples at different aging times at 650℃. It can be seen from the figure that there is no precipitation phase in the sample after solution treatment, and the basic structure is still composed of austenite and ferrite (Figure 1(a)). However, after 0.5h of aging treatment, a small amount of σ phase precipitated at the grain boundary between austenite and ferrite (Figure 1(b)). With the extension of time, a large amount of σ phase precipitated in the austenite and ferrite grain boundaries and in the original ferrite in the samples after the aging treatment for 8,100h (Figure 2(c), (d)).

Fig.1 XRD diffraction patterns of DSS2205 samples after aging at 650℃ for different time

Fig.2 SEM microstructure of 2205 duplex stainless steel after aging at 650℃ for different time

Figure 3 is a typical bicyclic potential reactivation method DL-EPR curve measured after DSS2205 steel is aged at 650℃ for different time. The maximum current of forward scanning is defined as activation current (Ia), and the maximum current of reverse scanning is defined as reactivation current (Ir). It can be seen from the figure that all the samples have obvious passivation areas. The samples without sensitization treatment have no flyback current (Ir) peaks after the DL-EPR test, while the DL- Tiny Ir peaks can be found in the EPR test curve. This shows that under the test conditions, the samples without sensitization almost have no intergranular corrosion, while the samples after sensitization for 1h have lighter intergranular corrosion. When the sample is sensitized for 8 hours, two obvious Ir peaks appear on the DL-EPR curve. WuTF et al. [7] researched that the peak with more positive potential corresponds to the intergranular corrosion current, while the peak with more negative potential Pitting current from the substrate. When the aging time is 100h, the peak reactivation current is the largest. Due to the aging treatment, various precipitation phases are produced, and these precipitation phases are all chromium-rich phases. Therefore, a chromium-poor zone appears around, and the passivation film in the chromium-poor zone is relatively weak. During the potential flyback, the surface passivation film at the chromium-poor zone is broken, resulting in a reactivation current peak. From the previous analysis, it can be seen that the aging time is prolonged, the precipitation phase increases, and the chromium-depleted area caused by the precipitation phase also increases, so the peak value of the reactivation current also increases. A chromium-depleted zone appears around the precipitated phase, and intergranular corrosion is mainly caused by the chromium-depleted zone.
Figure 4 shows the microstructure after the intergranular corrosion test. It can be seen from the figure that after the intergranular corrosion test, the structure of the sample after aging for 0.5h is not significantly corroded, while the sample after aging for 8h not only corrodes the ferrite/austenite grain boundary, but also the ferrite/ferrite grain boundary It is also corroded, which is consistent with the results of DL-EPR. The aging time is prolonged and the intergranular corrosion of steel is aggravated. 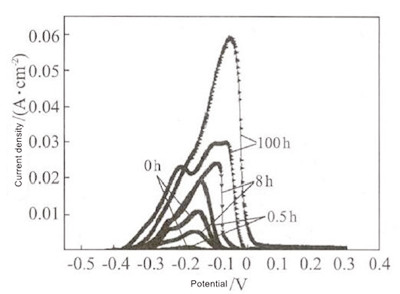