2205 DSS and 316L SS are working electrodes. The test area of the two samples is 1 cm2. After the sample is polished to 1000 × sandpaper, wipe the surface with ethanol, put it into a dryer for drying, and wait for the test.
The electrochemical test was completed by the parstat 2273 electrochemical workstation. The three electrode system was used in the test, with the platinum plate as the auxiliary electrode and the saturated calomel electrode (SCE) as the reference electrode. During the test, the working electrode was polarized at – 1.3 V for 3 min to remove the oxide film formed on the surface of the sample in the air.
The polarization curves of 2205 DSS and 316L s s in 5% HF solution were measured by potentiodynamic polarization method. The scanning potential range started from – 0.25 V relative to the open circuit potential, and ended when the potential reached the overpassivation potential. The scanning rate was 0.5 MV / s. The electrochemical impedance test was carried out under Ecorr potential. The amplitude of disturbance voltage was 10 MV, and the frequency range was 105 ~ 10-2 Hz. The impedance data was fitted by zsimpwin3.10 software. During the test, the solution temperature shall be controlled at (25 ± 2) ℃. The corrosion morphology after polarization was observed by Leica q500mw metallographic microscope.
The surface of 2205 DSS and 316L SS was polarized at 0.4 V constant potential for 2 h to form a passive film. Then the Mott Schottky curve of the passive film was tested. The test frequency was 1000 Hz, the excitation signal was 5 mV, and the potential scanning range was – 0.20 ~ + 1.1V.

3.1 open circuit potential curve
Figure 1 shows the open circuit potential curve of 2205 DSS and 316L SS in 5% HF solution. It can be seen that with the extension of corrosion time, the open circuit potential of both kinds of stainless steel moves to the positive direction. This is mainly because after the sample is immersed in the solution, the fresh metal surface begins to form passive film gradually. When the time reaches 2200s, the potential fluctuation range is very small, and the values tend to be stable at + 0.03 V and – 0.13 V, respectively. The potential of the former is higher than that of the latter, indicating that the passivation film formed on the surface of 2205 DSS has a more stable trend.

Figure 3 shows the macromorphology of 2205 DSS and 316L SS after polarization in 5% HF solution. It can be seen that pitting occurred on the surfaces of both kinds of stainless steels, but the number of pitting on 2205 DSS surface is much less than that on 316L SS, which is consistent with the law reflected by polarization curve. 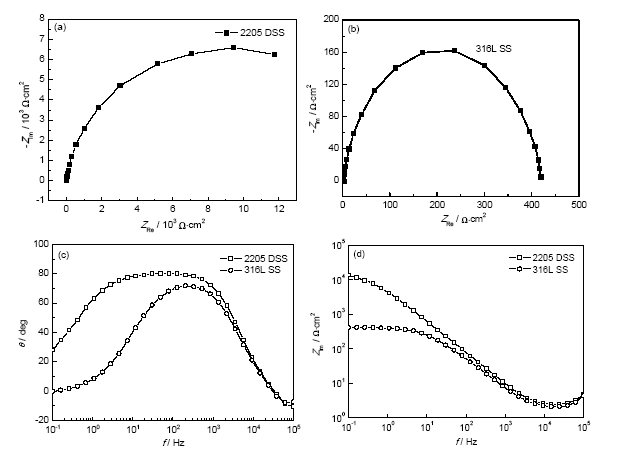 3.4 Mott schokkty curve
In many cases, the semiconductor properties of passive films are closely related to the Pitting Behavior of materials. By testing Mott Schottky curve, we can determine the type of passive film, donor density nd and / or acceptor density Na and other parameters. Specific calculation formulas can be found in reference [4].
Fig. 6 shows Mott-Schokkty curves of passive films formed by constant potential polarization of 2205 DSS and 316L SS at 0.4V for 2 h. It can be seen that in the range of – 0.20 ~ + 0.80 V, the slopes of the pipe fitting lines of 316L SS and 2205 DSS are all positive, indicating that the passivation films on the surfaces of the two kinds of stainless steels are n-type semiconductors. As the potential continues to rise, i.e. in the range of + 0.85 ~ + 1.1V, the slope of the pipe fitting straight line of 316L SS and 2205 DSS is negative, indicating that the two passivation films are p-type semiconductors. This is because the potential area is in the range of passivation, the oxide film dissolves, some high valence oxides are broken down, while Fe, Cr and Mo at the bottom of the film may be corroded to form low valence oxygen. As a result, the oxide composition of the passivation film changes and the semiconductor characteristics of the passivation film change [11].

Fig.6 Mott-Schottky plots of the passive films formed on2205 DSS and 316L SS