What is a conical head?

The conical head without flange is a section of cone.

Because the cone is directly connected with the cylinder, the shell shape at the connection is abrupt and discontinuous, resulting in large local stress. This stress depends on the size of the semi apex angle α of the cone. The greater the α, the greater the stress; otherwise, the smaller.

It is mostly used when the half apex angle of cone is more than 30 degrees. Because the larger the α, the greater the stress of the cone and the larger the required wall thickness, the more difficult the machining is. Therefore, the half top angle of conical head with folded edge is generally no more than 45 ° unless it is specially needed. In addition, the larger the inner radius r of the folded edge is, the better the stress state of the head is. Therefore, the design regulation has made the following restrictions: the inner radius r of the folded edge should not be less than 10% of the inner diameter DN of the large end of the cone and 3 times of the cone thickness.

There are three forms of flanged conical head:

There are four methods for flanging conical head:

In addition, there are also model tapping flanging.

The blank cone to be flanged is placed between the lower die and the blank holder ring of the press, and the shapes of the lower die and the blank holder ring are the same as those of the flanging of the conical head; the upper die is a general stamping die for the head, and the diameter is the same as the inner diameter of the small end of the conical head.
After starting the hydraulic press, with the downward movement of the upper die, the blank cone gradually deforms and flanging is completed.

The advantages of integral stamping flanging are high production efficiency, wide range of wall thickness and low cost of mass production.
The disadvantage is that the mould cost is high and the processing is difficult. Because of the different specifications of the conical head, the number of the mould increases. When the single piece is produced, the manufacturing cost will increase greatly due to the processing of the die.
With the increase of the size of conical head, the cost increases, and a large tonnage press is needed.
In very special cases, the conical head (including the variable diameter section) at both ends is formed by integral stamping, and the whole plate (which can be connected to the plate) is annular blanking. The large end of the blank cone is first pressed and then the small end is punched by using the upper die and the lower die.
Large end and small end need stamping flanging for many times, but small end flanging is difficult.

The split stamping and flanging is carried out on the hydraulic press (or hydraulic press), which is used for the flanging of the folded conical head after the split forming and then splicing. The process equipment (except the mould) and the forming method are the same as those of the stamping convex head which is formed by dividing and then splicing, so it will not be repeated.
However, if the length of the flanged conical head is large, it needs to be formed in sections and sections according to the diameter and thickness of the big and small ends. The flap of the folded section is pressed and flanged, and the flap of the non folded section is pressed. 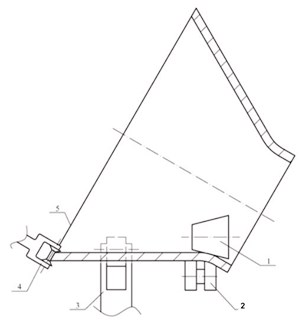 Spinning is only applicable to the large end flanging of conical head. Flanging is similar to the second step of “two-step” spinning forming of convex head, that is, the blank cone is placed between the upper roll (rolling roller) and the lower roll (profiling) of the spinning machine. After the press is started, the two rollers rotate and cooperate with each other until the large end flanging of the conical head is completed.
If the small end needs flanging, stamping or rolling shall be adopted. The stamping and rolling flanging method is the same as above.
The advantages of spinning flanging are low cost (reduce the number and cost of dies), suitable for a wide range of diameters, without wrinkles.
The disadvantage of spinning flanging is the low efficiency of mass production and small thickness range. 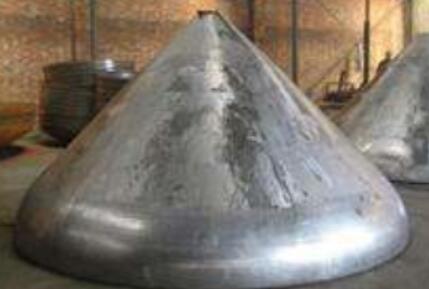 The model tapping flanging is mainly used for large end flanging of conical head with large diameter and thin wall thickness (such as the top folded conical head of atmospheric storage tank). The shape of the mold (model) is the same as that of the conical head. When flanging, it is difficult to ensure the flanging quality, especially the corner radius of the transition section, due to the uneven heating temperature and striking force of the plate Therefore, the method of model beating flanging is seldom used in the manufacture of pressure vessel flanged conical head.
The forming of conical head is difficult for cylinder section in terms of deformation size. It is easy to form hemispherical head, elliptical head and dished head. In fact, due to the particularity of conical head shape, it is difficult to control the forming process of hemispherical head, elliptical head and dished head.
Therefore, in addition to forming equipment, forming method, relevant forming technical requirements (such as butt misalignment of welded joints, edges and corners of welded joints, surface quality of welded joints, roundness, process thinning, shape and size deviation, heat treatment for restoring material properties, heat treatment for restoring material supply status, and welding requirements for restoring material supply status) and technical measures for conical head forming Besides, the following points should be noted:
(1) The requirements of marking accuracy and blanking accuracy are high.
Conical head is different from convex head and cylinder section, so there are many factors affecting the shape and size, and it is difficult to control.
Therefore, in the manufacturing process, it is necessary to accurately calculate the unfolding size, accurately draw lines and blanking, and at the same time, the groove processing, pre bending and forming operation should be strictly controlled, otherwise the shape and size will be out of tolerance.
(2) Various sizes restrict each other.
If the inner diameter of large end, small end and length deviation of conical head are too large, the assembly with cylinder will be affected. If one dimension is changed, the other size will change accordingly. If the inner diameter of large end is too large, the length of large end may be shortened in order to ensure assembly with cylinder.
It is difficult to correct this situation by orthopedic methods.
(3) The concentricity is out of tolerance.
It is difficult to control the concentricity of conical heads, especially those with folded edges.
The concentricity of the conical head affects the concentricity and straightness of the vessel. If the concentricity and straightness of the vessel are strictly required, in order to ensure the concentricity and straightness requirements, the misalignment of class B welded joints of the cylinder connected with the conical head may exceed the tolerance.
Because of the large rigidity of the conical head, it is difficult to correct the local correction and the out of tolerance of concentricity.
(4) Thickness of transition section of flanged conical head.
The thickness of the transition section is easy to be thinned by flanging of the conical head with folded edges. If it is hot flanging, the thinning amount is greater, especially at the large end transition section.
Insufficient thickness of transition section may cause insufficient strength or stiffness of conical head.
Therefore, the appropriate steel thickness should be selected to meet the minimum thickness requirements after the transition section is formed, but attention should be paid to the problem of steel thickness jumping.
(5) It is difficult to weld the longitudinal weld of conical head formed by split section, which belongs to class a welding joint.
Vertical welding (vertical welding) is generally adopted for longitudinal weld of segmented conical head, which is difficult to weld and the energy absorbed by impact is not easy to guarantee.
Therefore, for vessels with high impact absorption energy or low temperature vessels, tooling should be used to weld longitudinal welds to avoid vertical welding.
(6) Section assembly welding.
When the conical head is long, it needs to be assembled and welded after being made into sections (more than two sections). From the surface, it is similar to the cylinder assembly welding, but due to the particularity of the conical shell structure,
There are at least three differences between the welding ratio and the shell forming and welding ratio

(7) Welding and NDT of conical head and cylinder without flange.
The conical head without flange is directly welded with the cylinder (or equipment flange), and the longitudinal curvature of the shell at the joint is discontinuous, and the welded joint requires full penetration welding, which is not only difficult to assemble and control, but also difficult to control the welding quality and local stress. It is also not convenient for radiographic testing and ultrasonic testing, especially for ultrasonic testing.
Therefore, the quality of welding joint between conical head and cylinder is the key to control the welding quality of the whole vessel.