The inner ring of elastic bearing seat (hereinafter referred to as “inner ring”) is a part of an aircraft engine. In the working process, there is constant sliding, rolling and other relative motion process, and there is friction between the inner ring and other parts. At the same time, it also bears a certain alternating bending stress and contact fatigue stress, sometimes there is a certain impact force, and the working conditions are very bad. Corresponding to the service conditions, the common failure forms of the parts are excessive wear, surface spalling, fracture and so on. Therefore, the technical requirements of the parts are high hardness, high wear resistance and high contact fatigue resistance. Because the carbonitriding layer has higher hardness, wear resistance, corrosion resistance, bending strength and fatigue contact strength than the carburizing layer, but generally the carbonitriding layer is shallower than the carburizing layer, so it is generally used for parts with light load and high wear resistance. Therefore, the inner ring is carbonitriding quenched to obtain high surface hardness and high dimensional accuracy.

The material of inner ring is 12cr2ni4a steel, which has high hardenability. After carbonitriding quenching and low temperature tempering, not only the surface has high hardness, but also the core strength matches well with toughness and plasticity. This kind of material can be widely used to manufacture various kinds of engine important wear-resistant parts, such as gas separation double gear, elastic transmission gear, driving gear, driven gear, as well as various shafts, pins, pistons and rolling shafts. There are strict requirements for deformation control of the part during carbonitriding quenching, but the part is easy to deform due to its own characteristics (thin wall) and some difficulties in quenching operation of the press.

mm after heat treatment is

mm after heat treatment, which exceeded the required range.
2) When the elastic bearing seat is quenched by press, it is difficult for the parts to fit into the mandrel, which affects the quenching quality and makes the hardness of the parts unqualified.
Because the above two kinds of unqualified phenomenon will occur frequently, not in line with the production requirements, resulting in parts repair, or even scrap, seriously affecting the progress of scientific research and production, so it is necessary to analyze the causes of heat treatment defects of this part, in order to find a reasonable solution.

Cause analysis of deformation

Cause analysis of inner ring deformation

The deformation of inner ring during carbonitriding is caused by the following reasons.

The reasons for the low hardness of the inner ring during quenching are as follows.
1) Due to the deformation of the part during carbonitriding, it is difficult for the part to fit into the mandrel during quenching (it is required that the two earring shaped sections of the end face of the part must face the two wide faces of the mandrel), as shown in Figure 2. 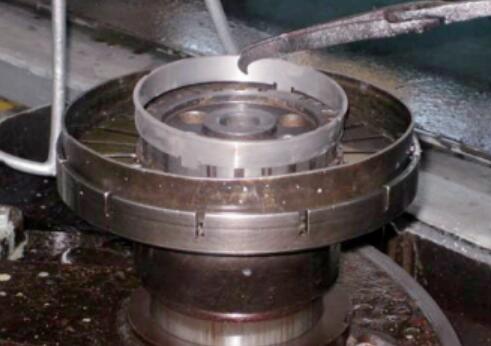 It can be seen from table 1 that the surface hardness, core hardness, flatness and deformation of the three batches of parts fully meet the technical requirements, which completely solves the problems of low hardness and inner hole deformation after carbonitriding and quenching of the original parts, and eliminates serious quality problems such as frequent repair and even scrap of parts.