How to evaluate and eliminate water hammer in liquid collection system?

How to evaluate and eliminate water hammer in liquid collection system?

What is water hammer?

In the pressure pipeline, because of some external reasons (such as sudden closing of valve, sudden stopping of pump unit), the flow velocity of water changes suddenly, resulting in water hammer. This kind of hydraulic phenomenon is called water hammer or water hammer.
Water hammer is called water hammer because of the inertia of the pressure water flow when the power is cut off suddenly or the valve is closed too fast, which produces the water shock wave, just like the hammering. Sometimes, the force produced by the back and forth of the water flow shock wave is very large, thus damaging the valve and the water pump.
When the electric water pump starts at full voltage, it can accelerate from static state to rated speed in less than 1s, and the flow in the pipeline increases from zero to rated flow. Because the fluid has momentum and compressibility to some extent, the sharp change of flow rate will cause the impact of too high or too low pressure in the pipeline, as well as the phenomenon of “cavitation”. The impact of pressure will make the pipe wall bear the force and produce noise, just like the hammer hitting the pipe, which is called “water hammer effect”.

The water hammer effect is only related to the inertia of water itself, but not to the water pump.

The harm of water hammer

The water hammer effect is very destructive: if the pressure is too high, it will cause the pipe to break, otherwise, if the pressure is too low, it will cause the pipe to collapse, and it will also damage the valve and fixed parts.
When the power is cut off and the machine is stopped, the potential energy of the pump water system will overcome the inertia of the motor and command the system to stop sharply, which will also cause the impact of pressure and water hammer effect.
Water hammer, a common but often unsolved fault, can pose a major threat to all liquid sampling systems. Water hammer knocking may be hidden in the system, or may damage the liquid system components at any time.

For plant operation, water hammer phenomenon is difficult to find out, and will disturb operation and damage equipment. In the field of domestic water pipe, water hammer is very common. When the tap is turned off suddenly, there is a knock in the water pipe. In the carefully adjusted liquid sampling system, water hammer will cause more serious consequences. Such a sudden pressure shock peak is enough to damage the pressure gauge, flow meter, water pump and other sensitive key process components, and may affect the whole system. If the pressure fluctuation intensity is strong enough, it can even cause the pipe or the pipe end joint to break. If the liquid flowing in the system is toxic or high temperature liquid, it will lead to dangerous conditions.
When the valve is suddenly closed and the liquid flow stops, water hammer may occur. In a typical sampling system, the root cause of water hammer failure is often ignored or misjudged. If the maximum process pressure of the system does not exceed its design maximum, where does the excess pressure come from? If the operator knows what causes the water hammer phenomenon and what correct measures should be taken, the water hammer phenomenon can be identified, estimated and minimized. In this paper, we will explain the internal situation of the sampling system when water hammer occurs.

When the valve is closed and the liquid flow is interrupted, some mechanism must be adopted to absorb the flow momentum of the liquid so that the liquid can stop. The liquid has a large weight and a fast flow rate, and the force that makes the liquid slow down will form a pressure shock wave. This kind of shock wave comes from the compression of the liquid and the deformation of the pipe wall. The generated pressure shock wave will propagate upstream in the pipe.
This type of shock wave occurs very fast, usually to the extent that a typical proportional relief valve cannot perform its intended function. This rapid pressure spike may also lead to rupture of the bursting disc of the relief valve, but such rupture usually occurs too late to reduce the severe damage suffered by the upstream sensor or flow meter, and these upstream components have borne all the force brought by the pressure spike before the relief valve is opened and released.
Therefore, the first step to solve the water hammer problem is to estimate the pressure spike caused by the impact phenomenon. We can use the Rukovsky equation to calculate this value. The density of the sampled liquid is taken as P. this equation is used to estimate the amplitude of water hammer phenomenon relative to the pressure fluctuation Δ P when the liquid velocity u changes suddenly
ΔP = c·p·ΔuΔP = c·p·Δu, parameter C is the internal sound velocity of the liquid under the actual operation condition.
For example, the sound velocity in water is about 1400 m/s at 20 ℃.
Therefore, when the valve operation results in the sudden cut-off of the flow with the flow rate of 1 m/s, the calculated pressure fluctuation value is:
ΔP = 1 400 m/s-1 000 kg/m3 – 1 m/s，ΔP = 1.4 MPa。
In the above example, the result is that there will be an additional pressure of 1.4 MPa in the sampling system, and the operator may not have made a response plan for this additional pressure at all, and the system may not be able to withstand this pressure. If the system flow rate is higher than 1 m/s, the pressure spike will be higher.
The JOUKOWSKI equation provides a theoretical peak pressure value, but in practice, the peak pressure may not be so high. Only when the velocity changes suddenly, the pulsation will form a force. In the next step, these actual conditions can be taken into account in the following formula (L is the length of liquid pipeline):
t≥(2-L)/c, if the length of water pipe in the above example is 100 m,
Then: t≥(200/1 400)-s，t≥142 ms.
In this case, T represents the time taken for the pressure wave to travel upstream and reflect back to the valve. Only when the reflected pressure wave returns and touches a closed valve, the complete pressure pulse wave will be formed. The above calculation results show that if the valve is closed for more than 142 ms, the pulse wave pressure will be lower than the calculated pressure, and the water hammer pulse wave value will be reduced to the minimum.

How to reduce water hammer?

In the domestic water pipe system, a vertical pipe containing trapped air mass can be installed near the tap, which can solve the water hammer phenomenon and eliminate the disturbing knocking sound in the pipe. This design is also suitable for the liquid sampling system in theory, but it will form a section of blind pipe and lead to the phenomenon of sample pollution.
Therefore, the differential method is required to reduce the water hammer phenomenon by managing the flow.

A better way to manage the flow is to use a multi turn needle valve with a slow cut-off flow and a fully closed seat instead of a ball valve that can cut off the flow immediately.
The ball valve cannot be closed (or throttled) slowly without damaging the valve. Sudden disconnection of the ball valve may cause significant pressure shock wave in the sensitive sampling regulation and conveying system, which may cause system damage. The system of multi rotary needle valve (as shown in the fast loop module in Figure 1) allows the operator to cut off the fluid at a relatively slow speed, which can effectively distribute the liquid momentum to a long period of time and minimize the water hammer shock wave. However, it should be noted that the pressure drop caused by needle valve is greater than that of ball valve. If the operator adopts needle valve, it should ensure that the system pressure supply is large enough.
The second method of flow management is to split the liquid directly in the system instead of cutting off the liquid flow. Figure 2 shows a fast loop system, using a common handle to control two ball valves, to ensure that each ball valve can not be opened and closed independently. Here, a three-way valve with special path design can be used to open a bypass flow path before the main path is closed. In such a system, these valves are never closed, which effectively reduces the occurrence of water hammer.

Figure.1 This schematic diagram shows the sampling system with needle valve isolation and bypass fast loop flow, and the slow shut-off flow of the valve can minimize the water hammer phenomenon. 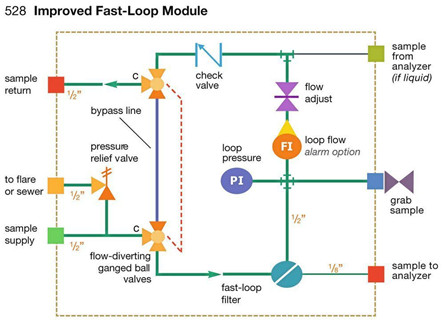 Figure.2 This schematic diagram shows a design scheme of fast loop sampling system, in which the design of shunt rather than cut-off is adopted, which can completely avoid water hammer. Two bypass valves are operated by a common handle at the same time, and a special path design is adopted inside the valve. Before one path is cut off, another path will be opened first.
Water hammer can affect any liquid sampling system, including maintenance, downtime issues, and potential hazards. When designing the system, designers should follow some basic design tips to prevent the system from being affected by water hammer.

Water hammer caused by too fast opening and closing of valve
(1) Extend opening and closing time.
(2) Centrifugal pump and coagulation pump shall stop when the valve is half closed 15% – 30% instead of fully closed.
Water hammer caused by pump
(1) Remove the air in the pipeline, fill the pipeline with water, and then start the water pump. Automatic exhaust valve shall be set at the high position of long-distance water pipeline.
(2) The stop water hammer is mainly caused by the quick closing of the check valve in the outlet pipe. Therefore, the cancellation of the check valve can eliminate the harm of the stop water hammer, reduce the head loss and save the power consumption. Through the experiments in some big cities, it is considered that the first level pump room can be cancelled and the second level pump room should not be cancelled. When the check valve is cancelled, the pressure of the stop water hammer should be calculated. In order to reduce and eliminate the water hammer, it is often Small resistance slow closing check valve is installed on large diameter pipeline. The buffer check valve and micro closed butterfly valve are installed on the outlet pipe of large diameter water pump, which can effectively eliminate the water hammer when the pump stops. However, there is a certain amount of water backflow when the valve acts, and the water absorption well must have an overflow pipe. Close to check valve and install water hammer eliminator downstream.

These design tips will help the system effectively reduce the water hammer phenomenon, so as to improve the system safety, reduce the maintenance workload, and minimize the system outage time. 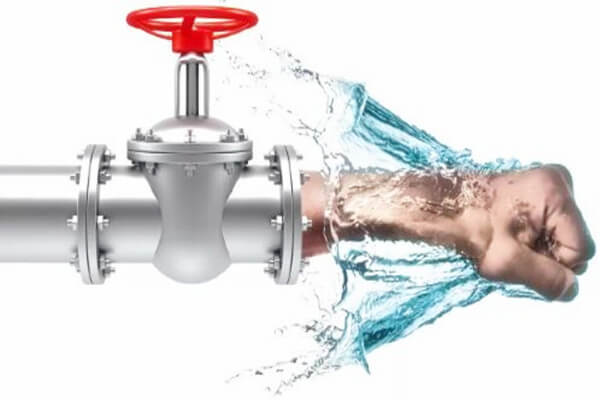