Sometimes people will ask what is the difference between I-beam and H-beam, and how to distinguish them. Others will think that I-beam and H-beam are the same thing. In fact, this understanding is wrong. Let’s guess which is I-beam and which is H-beam in the following two pictures?

For familiar friends, you can see at a glance that the first picture is I-beam, and the second picture is H-beam. Then what is the basis? The following is a specific introduction.

What is an I-Beam?

I-beams are mainly divided into ordinary I-beams, light I-beams and wide flange I-beams. According to the height ratio of flange to web, they are divided into wide, medium and narrow flange I-beams. The specifications of the former two are No. 10-60, that is, the corresponding height is 10 cm-60 cm. Under the same height, light I-beams have narrow flange, thin web and heavy web Light weight. Wide flange I-beam, also known as H-beam, is characterized by two parallel legs and no inclination inside legs. It belongs to economic section steel and is rolled on four high universal mill, so it is also known as “universal I-beam”. Ordinary I-beam and light I-beam have formed national standard.

The specification of I-beam is expressed by the centimeter value of waist width. For example, the waist width of No.10 I-beam is 10cm. The types of I-beam are hot-rolled common I-beam, light I-beam and wide parallel leg I-beam (H-beam). The waist width of Chinese hot-rolled common I-beam is 100-630mm, expressed as no.10-no.63, and the inclination of inner wall of leg is 1:6. The pass system of rolling I-beam has straight pass In addition, special rolling method can be used for I-beam.

I-shaped steel, whether ordinary or light, can only be directly used for bending members in the web plane or forming lattice members because of its relatively high and narrow cross-section size and large difference in inertia moment between the two principal axes of the section. It is not suitable for axial compression members or bending members perpendicular to the web plane, which makes it widely used I-beam is widely used in architecture and other metal structures.
Ordinary I-beam and light I-beam are relatively high and narrow in cross-section size, so there is a big difference in inertia moment between two main shafts of cross-section, which limits their application scope. The use of I-beam should be based on the requirements of design drawings.
The selection of I-beam in structural design should be based on its mechanical properties, chemical properties, weldability and structural size.

Specification and model of I-beam

The specification is expressed by height × leg thickness × waist thickness, and the number can also be used to indicate the main size of the specification. For example, 18 I-steel is 18 cm high. If the height of I-steel is the same, angle code a or B or C can be added after the number, such as 36a, 36B, 36C, etc. it can be divided into ordinary I-steel, light I-steel and wide flange I-steel. According to the height of flange and web plate The former two types of I-beams are 10-60, that is, the corresponding height is 10-60 cm.

The expression method of I-beam size: h × b × d

What is an H-Beam?

An h-beam is a kind of economical and efficient profile with more optimized cross-section area distribution and more reasonable strength to weight ratio. It is named because its cross-section is the same as the English letter “H”. Because all parts of H-beam are arranged at right angles, H-beam has the advantages of strong bending resistance, simple construction, cost saving and light structure weight in all directions, and has been widely used.

There are many specifications of H-beam products, and the classification methods are as follows.

In the world, the product standards of H-beam can be divided into English system and metric system. English system is adopted in the United States, Britain and other countries, while metric system is adopted in China, Japan, Germany and Russia. Although the measurement units used in English system and metric system are different, the specifications of H-beam are mostly shown in four dimensions: web height h, flange width b, web thickness D and flange thickness t There are different ways to express the size of H-beam in the world, but the size range and tolerance of the products are similar.

H-beam is a kind of economic section steel. There are two kinds of H-beam, hot rolled and welded. It is generally believed that when the section modulus of H-beam exceeds 10000, it is better to produce extruded H-beam by rolling than by welding. There are many kinds of H-beam, although the section modulus is not large, because the section is asymmetric, such as the legs have different lengths or thicknesses Compared with the rolling method, the welding method has the advantages of being able to “produce all kinds of H-beam sections which are difficult to roll”. The production operation is flexible and suitable for the market demand of small batch and variety.
The disadvantages of welding method are high metal consumption, high production cost and low output.
The production process of welded H-beam can be divided into two types: one is continuous type, which uses steel coil as raw material; the other is intermittent type, which uses steel plate as raw material.
The continuous process flow is as follows: steel strip longitudinal cutting → uncoiling → beveling → positioning → welding → straightening → shearing → packaging. The equipment layout is shown in the figure.

Equipment layout of continuous welding H-beam unit
The intermittent process is as follows: cutting and blanking → drying and shot peening → prebending → aligning and prewelding → feeding and welding → overturning and re welding → cutting to length → straightening → mark antirust → packaging.
Continuous process mostly adopts high-frequency welding, its output is about 20000 ~ 50000 T / A, it can produce narrow side, middle side and wide side H-beam, T-beam and l-beam with height of 200 ~ 500. Its welding speed can reach 30m / min. intermittent process mostly adopts submerged arc welding, its output is about 10000 ~ 30000 t / A, it can produce various width H-beam and T-beam with height of 200 ~ 1500mm, and its welding speed is high 8 m / min.
Continuous welding machine set was first invented in the United States, and then Japan, Sweden, Italy, Germany and other countries have built continuous welding H-beam machine set. Intermittent welding machine set is earlier than continuous welding machine set, and now almost all countries have it. This kind of machine set produced by Wuxi Hualian welding and cutting equipment factory not only supplies a large number of domestic units, but also exports to many countries.

I-beam: I-shaped steel, whether ordinary or light, has relatively high and narrow cross-section dimensions, so the moment of inertia of two main sleeves of the cross-section is quite different. Therefore, it can only be directly used for members bending in the web plane or forming lattice members. It is not suitable for axial compression members or members bending perpendicular to the web plane, which makes it difficult to use It has great limitations in the scope of application.
H-beam: H-beam is a kind of high-efficiency and economic profile (other cold-formed thin-walled steel, profiled steel, etc.), because of the reasonable section shape, they can make the steel more high performance and improve the cutting capacity. Different from the ordinary I-type, the flange of H-beam is widened, and the inner and outer surfaces are usually parallel, so it is easy to connect with other components by high-strength bolts. The size of H-beam is not the same The structure is reasonable and the models are complete, which is convenient for design and selection (except for I-shaped steel for crane beam).

I-beam: I-beams are all rolled sections. Due to the poor production process, the inner edge of flange has a slope of 1:10.
H-beam: The flange of H-beam is of equal thickness, with rolling section and combined section composed of three plates welded. The rolling of H-beam is different from that of ordinary I-beam, which only uses one set of horizontal roller. Because of its wide flange and no inclination (or very small inclination), it is necessary to add a set of vertical roller for rolling at the same time. Therefore, its rolling process and equipment are more complex than ordinary rolling mill. It can be produced in China The maximum height of rolled H-beam is 800mm, which is higher than that of welded section.

I-beam: The side length of I-beam is small and the height is large, so it can only bear the force in one direction. I-beam, as the name shows, is a kind of I-shaped section steel. The inner surface of the upper and lower flange has an inclination of 1:6, which makes the flange thin outside and thick inside. Therefore, the section characteristics of I-beam in two main planes are very different, and it is difficult to give full play to the strength characteristics in application There are also thickened I-beams in the field, but the structure of I-beam has determined its short plate of torsion resistance.
H-beam: H-beam has deep groove, large thickness, and can bear the force in two directions. All parts of H-beam are arranged at right angles, so H-beam has the advantages of strong bending resistance, simple construction, cost saving and light structure weight in all directions, and has been widely used.

Under the same specification, the weight of H-beam is lighter than that of I-beam. 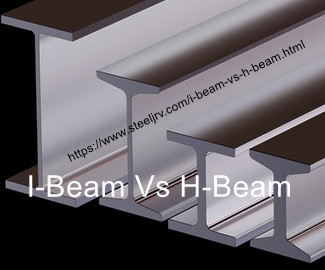