As we all know, when the thin-walled parts clamp the outer circle for turning, the parts are easy to deform under the action of clamping force, which affects the machining accuracy, and the dimensional tolerance of the workpiece is not easy to ensure.

For example, the processing of an export part 8T-4556, whose outer circle diameter is 412mm and wall thickness is 25mm, is a thin-walled part, and the blank is produced by casting, which has the characteristics of irregular shape. The process requires turning the end face and inner hole, and the dimensional tolerance zone of inner hole is only 0.08mm under the condition that the outer circle is the clamping and positioning benchmark. During the trial production of the part, we used the traditional soft three claw clamping method to clamp the outer circle. During clamping, the workpiece is easy to deform and affect the machining accuracy. At the same time, due to the irregular outer circle of the blank and unstable clamping positioning, in order to reduce the deformation, it is necessary to reduce the clamping force, but in this way, the clamping may not be tight.

In this regard, we break through the traditional way of increasing the clamping contact area (adding slotted sleeve), and adopt a floating three claw with six point positioning and clamping (as shown in Figure 1), which has achieved good results in practical application. 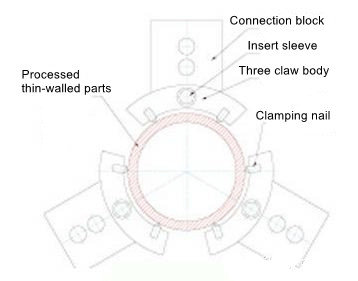 From the mechanical analysis, the traditional three claw contact surface is the contact area between the three claws and the blank, which is set as S1, while the contact surface between the floating three claw clamp with six point positioning clamping and the outer circle of the blank is set as S2, so the pressure on the part surface during the two clamping methods is P1 = F1/S1 and P2 = F2/S2 respectively. Because S2 is far less than S1, F1 is far greater than F2 under the same pressure.
In the processing of thin-walled parts, the smaller the clamping pressure, the better. The floating three jaw clamp with six point positioning clamping reduces the stress surface to two points, and S2 is very small. At this time, the pressure at the contact between the clamping nail and the workpiece is large, so that the clamping nail can be easily embedded into the workpiece surface to a certain depth. The clamping does not only depend on the friction force, which greatly increases the stability of clamping. When the clamping force is small, The clamping and positioning of the workpiece is realized.

When processing 8T-4556 with traditional three claws, the workpiece accuracy is difficult to ensure, and the rate of different qualified products is high. In recent years, through the use of the floating three jaw fixture with six point positioning and clamping, the machining effect has been significantly improved, which not only meets the process size requirements of the inner hole, but also has a very good cylindricity of the inner hole.