A friend asked a question:

There is a set of equipment with design pressure of 4MPa and design temperature of 230 ℃. The material of American standard pipe flange is 16Mn, class300, and the maximum allowable working pressure of flange is 4.266Mpa.

It’s very dangerous. Do you need to raise the pressure level of flange?
I asked: do you want to be promoted or not?
My friend said: “from the perspective of drawing, I don’t want to improve. After all, the design has been completed and I don’t want to modify it.
From the perspective of safety, if you want to improve, you can’t leave hidden dangers.”

This is what designers say.

In fact, in addition to the equivalent design pressure method, other methods can also deal with this problem.
Open ASME VIII I 2021, UG-44:

When ASME was updated every two years, there was no time to redesign the cover, not to mention the UG-44 content related to external load.

This formula can be used to calculate whether the flange can bear the current external load, so as to know well.
Of course, if conditions permit, pvelite can be directly used to check the influence of nozzle load on flange bearing capacity.
However, the report of pvelite is compiled according to the formula of the specification, which does not look very intuitive and cannot understand the contribution of bending moment and axial force.

The realization of Excel

The composition of the formula was analyzed, which was basically the same as the calculation formula of flange equivalent design pressure, but the FM value was added.

In order to conveniently measure the contribution of bending moment and axial tension to equivalent pressure, I decided to make an excel table, and its idea was evaluated according to the above formula after deformation.
The table interface is as follows: 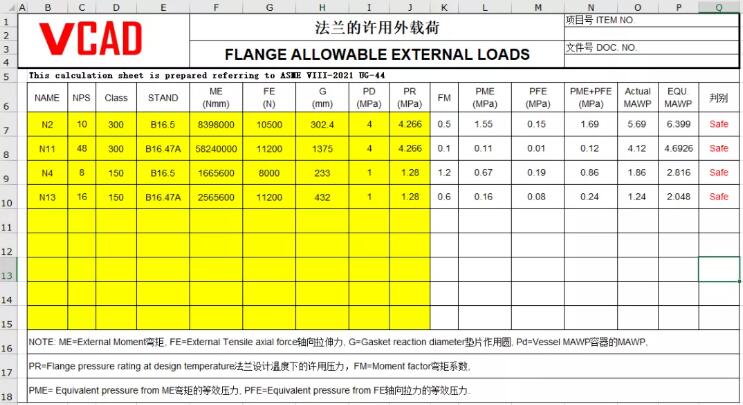 According to UG-44 calculation, we found that the flange is safe under external load.
Generally speaking, the contribution of bending moment to equivalent pressure is much greater than that of axial force.

Pay attention to some details