The scope of pressure vessel is defined according to ASME: 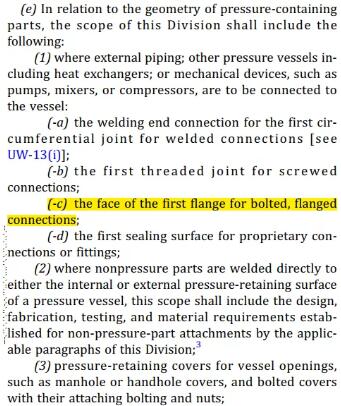 The first flange sealing surface of bolted flange connection is included.
Pipe flanges on pressure vessels also fall within the scope of the specification.
Therefore, the pressure grade of this pipe flange should also be determined by the specification, and basically all process nozzles have nozzle load more or less. How to evaluate whether the pressure grade of the flange is sufficient under the nozzle load?
UG44 in the 2019 edition of ASME VIII I updates a method to calculate whether the flange grade is qualified.

Does the nozzle load need to be converted into equivalent pressure?

Indeed, according to the strictness of the specification, there is nothing wrong with the supplement of the specification. It can even be said to be a progress. This is because it has changed from the previous complete handover to the stress and material specialty to the equipment specialty.
ASME Code feels correct and rigorous, but UG44 has far more impact than that.

For UG44 (b), previous articles said:
There are several issues to discuss:

After the original recommendation clause is interpreted as mandatory, there are many matters needing attention for project implementation.

When quoting to Indian purchasers, we specially sent a deviation from the mechanical data sheet provided by us, requiring 600# flanges to replace 300# flanges in the data sheet.
I vaguely feel that this problem is definitely not the wrong eye of the purchaser. The secret is likely to be in the code update of ASME VIII-2019.
So we made a clarification. We quoted according to the data sheet Class300. The reply of the Indian purchaser is:

After discussing with piping system and pipeline system stress, stress colleagues said:
In the past, the flange grade was a matter of pipe materials, not equipment pipes. The stress discipline will also calculate these nozzles. Finally, we will remind whether they are suitable. Moreover, the whole pipeline is Class 300, and there is a disharmony of Class 600 on the equipment, so it is inappropriate to change to Class 600 in the quotation stage.
Finally, we will quote according to Class 300.
It can be seen from Indian purchasers that they take it as a risk to avoid and a must to implement.

During the implementation of a project, UG-44 (b) must be considered according to the owner’s requirements and special reminders.
After calculation, considering the load, more than 30 nozzles need to be changed from Class150 to Class300.
The design pressure of the equipment is mostly 0.6MPa and the design temperature is 60 or 70 degrees. Seeing the uneven nozzle grades, there is a strong discomfort. Why is there such an inharmonious freak!
Why is the flange pressure level increasing frequently, why is the flange level so uneven, and why is the site of pipeline materials and stress gradually eroded and unable to make a sound. Behind all this, is it the distortion of ASME or the decline of AI? Is the design weak or the software radical?
But the project is still going on, so how to deal with this kind of thing?

Here, there are three strategies:

The worst policy is easy to make mistakes. Here are some examples:

Does UG-44 (b) only add chaos and not benefit?
In fact, UG-44 (b) is very useful when the pipe flange is used as the equipment flange.
For example, for a 10m small diameter equipment, the pipe flange is used as the equipment flange to calculate the thrust of wind and earthquake. After the bending moment is substituted into UG-44 (b) calculation, it can directly judge whether the pound grade of pipe flange is sufficient.
There is no need to use the waters method to calculate the pipe flange, so as to avoid the embarrassment that the standard flange can not be calculated by the waters method, and the convenience of design is greatly improved.
Moreover, because it is an equipment flange, it has nothing to do with other disciplines. The equipment is set by itself and free.
The essence of UG-44 (b) is whether the failure of the flange connected to the piping is a matter of equipment or pipeline. Half of these flanges belong to equipment and half belong to pipeline. When the pipeline says there is no problem and the equipment says there is a problem, who has the right to speak and who has the power to speak.
The flange grade should have been determined by the material and stress specialty, but now there is an additional equipment to calculate. Is it necessary, or is it adding to the snake, so that the tragedy of multi door coordination can be avoided.
Whether all kinds of software, as a mandatory item, have been considered carefully, and whether it has been considered to set it as an option to really make may be.
The updated content of ASME is advancing with an inch and looking forward to the future. It is only for the internal coordination of its own specialty without considering the coordination of the whole system. Is this update still worth learning?