ASME flange calculation is in mandatory Appendix 2, and its calculation principle and method are consistent with those in GB150, and the calculation results are basically the same. But what are the differences between the design details of the two flanges?

It can be seen from the table that the width of gasket recommended by ASME is wide. The maximum width of spiral wound gasket in NB is 25, and the maximum width of cushion is 30. If the gasket width is too large, the preload will be too large, so as to obtain a thicker flange, which is not particularly economical. In actual design, Nb flange and gasket size can be used to check.

For example, if O-ring gasket is used, it can refer to ASME gasket value, m and y are all 0.

According to GB, it is unnecessary to check the stiffness of loose flange.
The case I met before, large diameter A-type flange, passed the calculation, but it couldn’t be sealed in the process of use. The manufacturer called to ask us if the calculation was wrong. After careful check, the calculation is really no problem. But the stiffness is calculated according to ASME, which is not enough. Of course, at that time, even the overall flange did not need to calculate the stiffness, let alone the type a flange. Therefore, the reply from the technology department is that the design is completely in accordance with the specifications, and there is no problem with the design. In the end, I don’t know how they solved it.
This place is really open to discussion. You can’t abandon it as a whole just because the rigidity of loose / looper flange increases the thickness of flange. It’s OK to increase the stiffness coefficient for accounting. You can’t stop eating because of choking and avoid medical treatment.

When calculating the flange of the pipe box, the influence of the gasket on the preload is not considered in GB151.
In ASME VIII I, bolt load should be considered for split diaphragm gasket.

When the taper is 1:3 trimmed, no straight edge segment is left. Of course, in order to ensure the welding and filming effect, the straight edge length that can make groove can also be reserved.

NB/T47023 allows the small end thickness to be greater than the cylinder thickness.

In ASME, for highly toxic vessels or when specified by the user or his designated representative, the maximum bolt spacing shall conform to the following formula.

When the distance between two adjacent bolts exceeds 2A + T, when calculating the flange stress, M0 shall be multiplied by the bolt distance correction factor BSC, which is equal to the root of the distance ratio.

BSC is greater than 1, so when the bolt spacing is too large, larger flange torque Mo should be used as compensation.
In GB, this is a pity. For example, in SW6, if the design bolt spacing exceeds the maximum bolt spacing, the program does not deal with it. Many designers only look at whether the final stress and stiffness are qualified. It doesn’t matter if the bolt spacing exceeds. This will leave a leak.
In fact, it is easy to understand that excessive bolt spacing will affect the uniformity of the seal. The compression force of the gasket in the middle of the two bolts must be less than that of the bolt.
How to deal with this situation in GB design?
I suggest that BSC should be calculated manually at this time, and then the stress calculation results should be expanded by BSC times. If the calculation is passed, then there is basically no problem. But it is suggested that SW6 should take the initiative to consider this, which is convenient and reasonable.

Type a flange and type b flange

or type b flange: 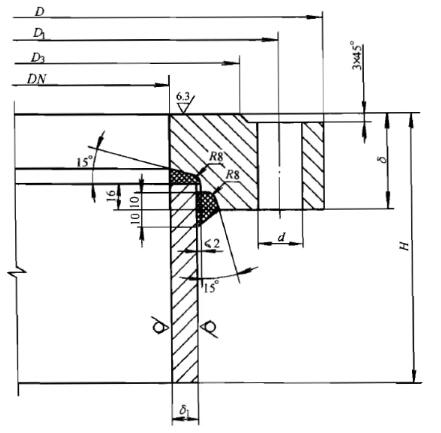 Generally, NB/T47021 / 47022 type A or B flange is not used in ASME, mainly because this kind of welding structure cannot be found in ASME. 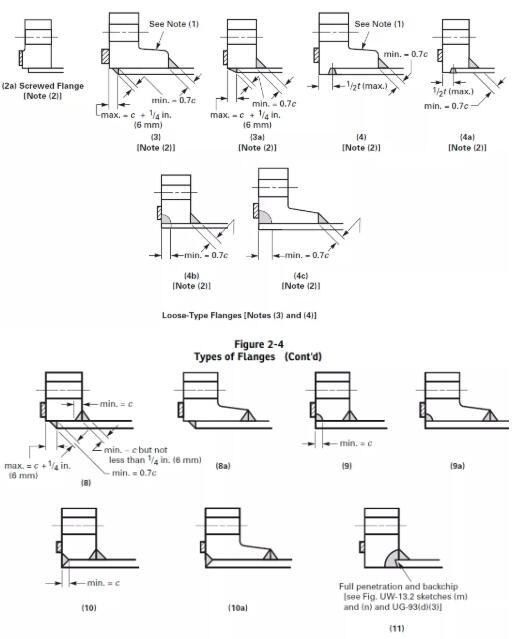 A is three times the thickness of the cylinder, which is basically impossible. Compared with type A and type B flange, the height of welding leg is much smaller.
If flat welding flange must be used, similar welding structure can be adopted. See Figure 2-4 (4a) in Appendix 2.

I think, since the requirements are so high, type a and b should not be used.