When calculating the flange of equipment, should the thickness of small end of flange or cylinder be input? 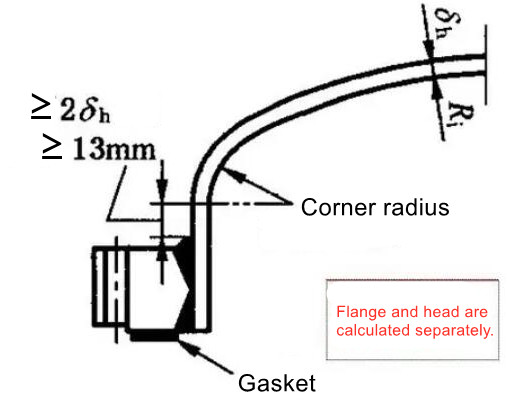 Of course, it can also be understood from another aspect that the head has a strengthening effect on the flange. The corner of the head is subjected to compressive stress, and the membrane stress on the small end of the flange is tensile stress. The effect of superposition with the flange is to make both stresses better. Therefore, it is considered that this kind of structure can be calculated separately by national standards.
The circumferential membrane stress of small end of flange is not considered in the flange calculation of GB150. For example, when ASME calculates flange, the thickness of small end of flange should be calculated according to internal pressure. If not considered in GB150, the thickness of the straight edge may be very thin, even the membrane stress can not pass, the flange calculation is passed. There are also risks. 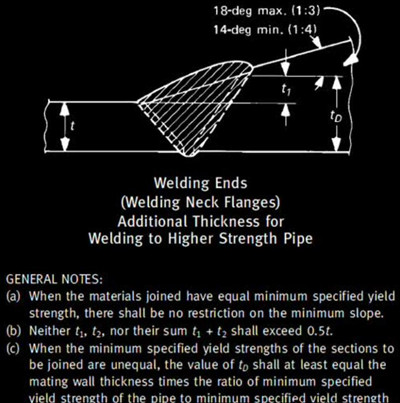 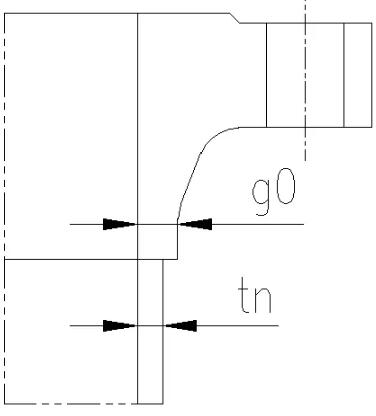 Because in general, according to Nb / T 47023 equipment flange selection calculation, the flange small end thickness is generally greater than the cylinder thickness.
In order to save materials in many units, the input thickness go is the thickness of the small end of the flange. Even some units regard this method as a summary of engineering experience.
So is this right?
In the mandatory Appendix 2 of ASME VIII i-2019, for the value of the small end thickness, in the case of the above figure, the thickness of the thinner part should be taken, that is tn.

This has been updated in the 2017 version.
The standard compilers should have noticed the similar arguments, and in order to avoid misunderstanding, they wrote them in the main body of the standard.
What to do after that?
I know that many units often input the thickness of go as the small end thickness in order to reduce the cost.
This avoids increasing the thickness of the cylinder, and the margin of the flange will look better.
But as designers, they should know:
This kind of input method is wrong, it is the behavior of playing edge ball, and with the specification gradually clear, this value will be gradually prohibited.
According to the ASME Design, the small end thickness of flange is always taken as a small value, no matter in the code or in the supporting software. If the flange small end thickness input is greater than the cylinder thickness, the software will have a red font prompt. There’s no more edge ball.
The equipment designed according to GB 150 may be controversial, because there is no similar explicit regulation in GB after all. On the contrary, Nb flange still supports that the thickness of small end of flange is greater than that of cylinder. But designers should know which is right. The boss thinks that the thickness of the cylinder will not be wasted in the future.
Safety and compliance
Many friends will say:
I have been inputting the small end thickness of flange before, and there is no safety problem, which indicates that this kind of input is correct.
I don’t think that the input method of go will have security problems.
But no safety problems, does not mean to meet the requirements and spirit of the specification.
Designers try their best to be compliant and safe, which may be a kind of protection for themselves.
Compliance and safety are the best conditions.
It’s dangerous to break the rules. It’s easy to understand why we should not do it.
Safe but illegal, the following conditions:
1. For example, go is used for small end, but pay attention to a certain margin. A lot of practice has proved that most of them are safe.
2. For example, a heat exchanger originally met with creep fatigue condition, which was designed in the 1970s without considering fatigue, but it has been in safe operation for 40 years. Considering the actual use situation, the owner cancelled the creep fatigue design condition, and designed according to the original drawing.