In a piping system, an pipe elbow is a pipe fitting that changes the direction of the pipe. According to the angle, there are three most commonly used 45° and 90°180°, and other abnormal angle elbows such as 60° are also included according to engineering needs. Elbows are made of cast iron, stainless steel, alloy steel, malleable iron, carbon steel, non-ferrous metals and plastics. The way to connect to the pipe is: direct welding (the most common way) flange connection, hot melt connection, fused connection, threaded connection and socket connection. According to the production process, it can be divided into: welding elbow, punching elbow, push elbow, casting elbow, butt weld elbow.

What is a long radius elbow?

The center line of one end to the opposite face. This is known as the “center to face” distance and is equivalent to the radius through which the elbow is bent.
The center to face distance for a “long” radius elbow, the LR radius elbows have a center to end distance that is 1.5 times the NPS in inches (R = 1.5D), if it is more than 1.5 times, it is a bend. D is the diameter of the elbow. Long radii are commonly used. Generally, the default is also a long radius. Where the pressure is high or the flow rate is high, a long radius is used. If the resistance of the solid conveying pipe is strict, a larger radius elbow is used.

What is a short radius elbow?

Short radius elbow’s radius is equal to the NPS in inches (R = 1.0D). Short radii are generally used in low pressure fluids or where the elbows are limited during installation. Long-radius elbows are preferred if there are no conditions or are not specified in the contract. 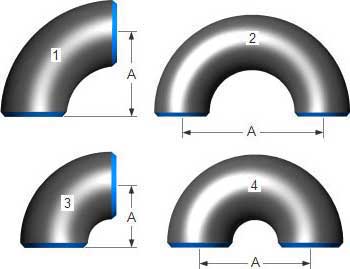 for example, we will find the center to face distance of NPS 2 elbows (the A distance on the image) 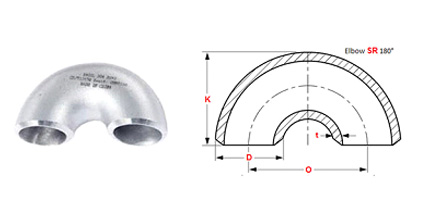 LR or SR elbow to use?

How to purchase elbows?

Through a series of tests, you will be able to purchase good quality elbows.

What is Elbow Radius?

The elbow radius mean curvature radius. If the radius is the same as pipe diameter, it called short radius elbow, also called SR elbow, normally for low pressure and low speed pipelines.
If the radius is larger than pipe diameter, R ≥ 1.5 Diameter, then we call it a long radius elbow (LR Elbow), applied for high pressure and high flow rate pipelines.

What is Long radius 90 degree elbow?

90 degree LR elbow are installed between different lengths pipe or tubing. It helps to change direction at 90 degree, and is commonly used to connect hoses to pumps, deck drains and valve.

What is Short radius 90 degree elbow?

90 degree SR elbow is the same as the pipe elbow mentioned above, but the diameter is shorter. Therefore, this kind of steel elbow is often used when space is not enough.