The treatment process of stainless steel plate pickling is complex, involving many kinds of process medium, toxic, corrosive, strong oxidation and high solid content of wastewater. This paper introduces the new technology of ultrasonic and electrolysis to treat strip steel, and the measures of ultrasonic mud transportation and energy medium recycling are introduced. It not only improves the electrolysis efficiency, prolongs the life of electrode plate and other equipment, but also realizes zero emission of effective medium. The acid mixing system adopts the injection technology at the bottom of the pickling tank and the measures of recycling energy medium, which improves the pickling efficiency, prolongs the service life of the heat exchanger and other equipment. The effective medium of the process is recycled and utilized, and the energy medium consumption is saved. The acid mud cake is treated chemically and the neutral sludge with friendly environment is output. 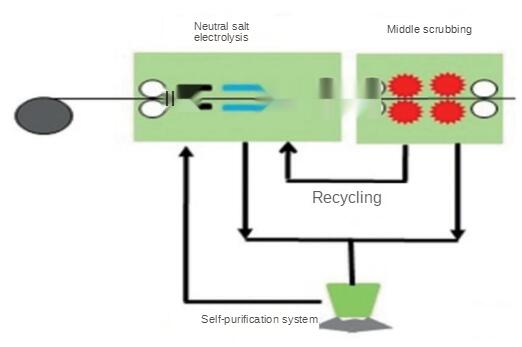 During rolling or annealing, stainless steel plate will produce a layer of oxide, which consists of ferrochromium oxide, iron oxide and other alloy element oxides. These oxides usually contain the structure of Cr2O3 and spinel FeO · Cr2O3 (FeCr2O4), which is particularly difficult to dissolve in acid solution. In addition, a layer of chromium poor layer will be formed on the surface of the metal matrix, which leads to the decline of the corrosion resistance of the strip steel. Therefore, the purpose of stainless steel pickling is to remove the oxide layer and chromium poor layer on the surface of the strip steel, and passivate the stainless steel surface to improve the corrosion resistance of the steel plate.
Stainless steel pickling process is generally continuous treatment, and it is carried out in combination. At present, the mainstream stainless steel pickling process includes shot blasting and scale breaking (hot rolling roll), sulfuric acid pickling (hot rolling roll), neutral salt electrolytic pickling (cold rolling roll), grinding brush (hot rolling roll) or common brush washing (cold rolling roll) + nitric acid electrolytic pickling (cold rolling roll, 400 Series) + mixed acid pickling. It can be seen that the stainless steel pickling process is complex, involving a large variety of pickling media, and the energy medium quality required is very large. How to reduce the energy medium consumption of each process unit is a critical problem.
The function of neutral salt electrolytic pickling is to remove chromium oxide (Cr2O3), manganese oxide (MnO) and some chromium poor layer on the surface of strip steel, and make the oxide skin burst on the surface of strip steel, which has many factors affecting the efficiency of electrolytic pickling. In the process of electrolytic pickling, some metal oxide precipitates and metal element deposits will be produced. When the production reaches a certain extent, the precipitate will accumulate Polymerize into acid mud. If acid sludge is not removed in time, it will not only adhere to the surface of the electrode plate, increase the resistance of the electrolysis process, cause uneven current distribution, and accelerate the corrosion of the electrode plate, but also accumulate in the tank, tank body, low-lying and dead zone of the pipeline, which will cause the electrolyte pipeline to be blocked and affect production.
Acid mixing pickling has the characteristics of short pickling time, small corrosion of base metal and low surface roughness. However, some metal oxides and metal elements precipitates will be produced during pickling. These precipitates will remain on the surface of strip steel to prevent fresh acid from contacting with strip steel. If acid mud is not removed in time, it will also accumulate in tank, tank, valve, pipe and low-lying Dead zone, resulting in equipment and pipe blockage, affecting production, and will adhere to the surface of the heat exchanger, resulting in uneven heating or even local overheating of the heat exchanger, accelerating the damage of the heat exchanger. In recent years, the state has been more and more strict in the management of solid hazardous waste, so it is necessary to develop the recovery of acid washing waste liquid and more environmental protection treatment methods.
In the process of pickling stainless steel plate, a large number of toxic, harmful and corrosive liquid and solid pollutants will be produced. For example: chromium (cr6+) wastewater, chromium (cr6+) sludge, toxic and corrosive liquid (h+, no3-, f-), toxic and corrosive sludge (h+, no3-, f-). The green treatment of these liquid and solid pollutants and the recovery and utilization of effective free process media are not only related to the production quality and benefit of the enterprise’s own products, but also closely related to the surrounding environment.

In the process of neutral salt electrolytic pickling, chromium oxide in the oxide skin of strip steel surface and chromium in metal matrix will be dissolved by electrochemical action to generate heavy chromium ion, mainly in the form of cr2o72- and cro42-. Heavy chromium ion is a strong oxidant, which has great toxicity and is harmful to equipment, pipeline, human body and environment. After the above measures are collected into the circulating tank, the electrolytic waste liquid is transported to the neutral salt purification and recovery system by pump. After pH adjustment, reduction and neutralization treatment, it has been treated as neutral and non-toxic sludge containing waste liquid. In order to solve the problem of long settling time, the flocculation tank can be improved. The bridge, cross-linking and sediment can be gathered in a short time, and the treatment time of 50% can be shortened, and the filter device can produce neutral sludge more efficiently.

The mixed acid can be heated by steam generated by the waste heat boiler of the unit. The condensate generated by heat exchange is first added to the final rinsing system to wash the strip steel, and recycled step by step according to the sequence of final rinsing system → washing and rinsing system → mixed acid circulation system; waste water generated by acid mist purification system can also be transported to the washing and rinsing system for utilization. Acid mixed acid washing solution containing certain acid mud does not need to be discharged to the sewage pit after the sedimentation of the circulating tank. It is transported to the purification unit to separate the acid mud, and the purified liquid is returned to the circulating tank, which avoids pipeline blockage and equipment damage, thus realizing the recycling of effective medium and saving new acid consumption greatly.

As HF in the mixed acid reacts with metal ions in the solution, precipitates are generated:

HNO3 reacts with chromium poor layer to produce no gas (bubbling effect), which will peel off the oxide skin and fall off. Sludge in acid mixing system can be divided into two parts: fef3 · 3H2O, Fe · GR F3 · H2O, nif2 and FeO, Fe3O4, Cr2O3, Fe2O3, (Fe · CR) 3O4 spinel. The above toxic and corrosive sludge containing waste liquid produced by the acid mixing system has a great impact on the equipment, pipeline, pipeline accessories and the surrounding environment. The acid mixing waste liquid is collected in the circulating tank by the above measures, and then transported to the purification system of the mixed acid waste liquid by pump. After filtration, the filter cake is washed, reduced, neutralized and flocculated. The filtrate and washing liquid can be returned to the circulating tank for further use, which can greatly reduce the dosage of reductant, neutralizer and flocculant, and finally form the output of neutral block sludge.
Author: jiahonglei, liaoyanlin, lichunming