What is a pipe coupling?

A coupling (or coupler) (used in piping or plumbing) is a very short length of pipe or tube, with a socket at one or both ends that allows two pipes or tubes to be joined, welded (steel), brazed or soldered (copper, brass etc.) together. 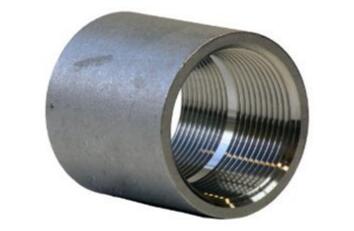 Alternatively it is a short length of pipe with two female National pipe threads (NPT) (in North American terms, a coupler is a double female while a nipple is double male) or two male or female British standard pipe threads.
If the two ends of a coupling are different (e.g. one BSP threaded and one NPT threaded), then it is usually referred to as an adapter. Another variation is one plain socket and one threaded socket. Yet another variation would be 3/4″ NPT to 1/2″ NPT.
When the two ends use the same connection method but are of a different size, the terms reducing coupling or reducer are used.

A pipe coupling is any fitting or device used to join two or more pipes in such a way that continuity is maintained between them. The body of a pipe coupling is typically made of the same or similar materials as those used to construct the pipes it joins. They may be rigid or flexible depending on the amount of movement the pipe is subjected to and may per permanent or removable fixtures. A pipe coupling can be stepped or reduced in internal diameter to accept pipes of different sizes, be T or cross shaped to join more than two pipes, or angled to form bends. Pipe couplings may also include peripheral features or equipment such as inspection openings, flow meters, or valves.

Most pipe installations require that several lengths of pipe be joined together or cut to facilitate changes in direction and crossing of obstacles. This requires a fairly quick method of connecting the sections while maintaining the integrity of the pipes in the process. These couplings may be permanent by nature or, if possible disassembly is desirable, of a removable design. Permanent pipe couplings generally make use of soldering or brazing in the case of steel or copper pipes or adhesives in the case of PVC pipes. These permanent joints, if correctly installed, offer excellent rigidity and sealing characteristics where no future changes in the piping are foreseen.

Removable pipe couplings are most often of a threaded design which allows them to be screwed onto the pipes to be joined. The most simple of these is a basic pipe section slightly larger than the pipes to be joined and cut with an internal thread. The ends of the pipes are also threaded, and the coupling is simply sealed with hemp or sealing tape and screwed onto both pipes. More complex removable pipe couplings are of a two-part design where one part is attached to each pipe and then screwed together to complete the joint. These types of couplings are often used on high pressure copper gas pipes and flexible hydraulic or pneumatic hoses.

A pipe coupling is also often used to facilitate changes of pipe routing, crossing of obstacles, and penetration of walls. These couplings are typically elbow or U shaped but may include several variants featuring different angles of deflection. Step-down or reduction pipe couplings featuring different end diameters are used to join pipes of dissimilar sizes. Adaptor fitting may also be used to join pipes of different materials and feature separate end fittings suitable for both materials. Where more than two pipes are to be joined Y, T, or cross shaped couplings are common methods of achieving the joints.

The pipe olet is also called the pipe socket, the saddle, and the saddle pipe joint. Reinforced pipe fittings mainly used for olet connection, instead of using reducer tee, reinforcing plate, reinforcing pipe section and other pipe connection types, it is safe and reliable, reduces cost, simple construction, improves medium flow channel, series standardization, and convenient design and selection. Such outstanding advantages, especially in high pressure, high temperature, large diameter, thick wall pipelines, are increasingly used, replacing the traditional olet connection method.
The main body of the olet is made of high-quality forgings, and the materials are the same as the pipe materials, such as carbon steel, alloy steel and stainless steel. Both the olet and the main pipe are welded, and the connection of the olet or other pipe (such as short pipe, wire plug, etc.), instrument and valve has three types: butt welding connection, socket welding connection and screw connection. Commonly used manufacturing standards for olet stations are MSS SP-97, GB/T19326 and other standards.

• How to get high quality pipe nipples

• The difference between pipe nipple and pipe coupling

• What is a Pipe Nipple