Fatigue curve is the relationship curve between fatigue stress and fatigue life, that is, S-N curve, which is the basis for determining fatigue limit and establishing fatigue stress criterion.
In 1860, Wöhler first proposed the concepts of fatigue curve and fatigue limit when solving the fracture of train axle, so later generations also called this curve the Wöhler curve.
For metal materials with general strain aging, such as carbon steel, ductile iron, etc., when the cyclic stress level drops to a certain critical value, the low stress section becomes a horizontal line section, indicating that the specimen can undergo infinite stress cycles without fatigue Fracture, so the corresponding stress is called the fatigue limit, denoted as σ-1 (symmetric cycle, r=-1). If this kind of material does not break after 107 cycles of stress cycles, it can be considered that it will not break even after infinite stress cycles. Therefore, 107 cycles are often used as the basis for determining the fatigue limit.
Another type of metal material, such as aluminum alloy, stainless steel, etc., has no horizontal part in the SN curve, but as the stress decreases, the cycle continues to increase. At this time, it can only be specified that a certain cycle cycle does not occur according to the use requirements of the material. The stress at break is regarded as the conditional fatigue limit, or the finite life fatigue limit.

The fatigue curve is usually determined by rotating bending fatigue test. The high stress (limited life) part of the SN curve is measured by the group test method, that is, the higher stress level of 3-4 is taken, and the data of about 5 samples are measured at each stress level, and then the data is processed and calculated The median (50% survival rate) fatigue life.
The σ-1 measured by the lifting method is used as the lowest stress level point of the S-N curve, and the result of the group test method is fitted to a straight line or curve, and the median S-N curve with a survival rate of 50% can be obtained.

The relationship between fatigue limit and static strength 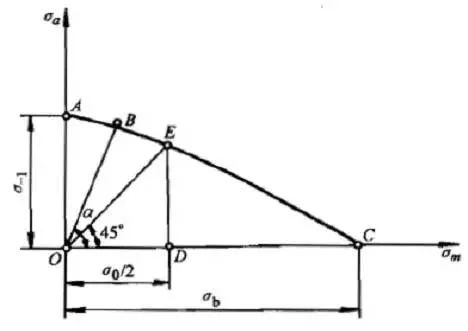 Under the condition of different stress ratio r, the fatigue limit σr represented by σmax is decomposed into σa and σm, and the ABC curve is drawn in this coordinate system to obtain the σa-σm fatigue diagram.

Due to the needs of use, mechanical parts often have steps, corners, keyways, oil holes, threads, etc. These structures are similar to notches, which will change the stress state and cause stress concentration. Therefore, it is also important to understand the influence of the stress concentration caused by the notch on the fatigue limit.
When evaluating materials based on fatigue notch sensitivity, two extreme situations may occur:

Therefore, the qf value can reflect the material’s ability to redistribute the stress during the fatigue process and reduce the stress concentration.