Tensile is a simple mechanical performance test. In the test gauge length, the force is uniform, the measurement of stress, strain and its performance indicators is stable, reliable, and convenient for theoretical calculation. Through the tensile test, the most basic mechanical performance indicators in the process of elastic deformation, plastic deformation, and fracture of the material can be measured, such as positive elastic modulus E, yield strength σ0.2, yield point σs, tensile strength σb, elongation after fracture δ and reduction of area ψ etc. The mechanical properties obtained in the tensile test, such as E, σ0.2, σs, σb, δ, ψ, etc., are the inherent basic properties of materials and the main basis in engineering design.

Table of Contents hide
Sampling location and method
Test equipment
The impact of the test environment
Choice of test method
Some basic issues
How to define the plastic deformation of the actual metal in the project?

Tensile test is the most common test in metal mechanical property test. The measurement results of the same material through different tensile test processes are not necessarily the same. What factors affect the tensile test?

Due to the uneven distribution of ingredients, organization, mechanism, defect processing and deformation in the material, different parts of the same batch or even the same product appear to be different. Therefore, when cutting samples, it should be strictly in accordance with the regulations in the GB/T-228 appendix.

The test equipment directly affects the accuracy and authenticity of the result data, so it is necessary to ensure that the test machine is within the valid period of verification during the experiment. As shown in the figure, it is the WDW-50 universal testing machine. The equipment is regularly checked and inspected.

The impact of the test environment

The test environment mainly includes the influence of ambient temperature and the selection of clamping devices.

The test methods mainly include clamping method, stretching rate, stretching cross-sectional area and pattern size measurement method. When choosing the size of the measuring pattern, it is advisable to choose an outside micrometer, a vernier caliper or a vernier caliper for rectangular samples.
In addition, due to the different subjective factors and operating skills, it will also bring errors to the measurement results. Therefore, the inspector should pass strict training and carry out the test in accordance with the GB/T 228 standard method.

For most metal materials, in the area of elastic deformation, the stress and the strain become proportional. When the stress or strain continues to increase, at a certain point, the strain will no longer be proportional to the applied stress.
At this point, the bond with the adjacent initial atom begins to break and is transformed with a new set of atoms. When this happens, the material will no longer return to its original state after the stress is removed, that is, the deformation is permanent and unrecoverable. At this time, the material enters the plastic deformation zone (Figure 1).

Figure 1 Schematic diagram of plastic deformation
In fact, it is difficult to determine the exact point where the material changes from the elastic zone to the plastic zone. As shown in Figure 2, a parallel line with a strain of 0.002 is drawn. Use this line to cut the stress-strain curve and determine the yielding stress as the yield strength. The yield strength is equal to the stress at which significant plastic deformation occurs. Most materials are not uniform, nor are they perfect ideal materials. Material yielding is a process, usually accompanied by work hardening, so it is not a specific point. 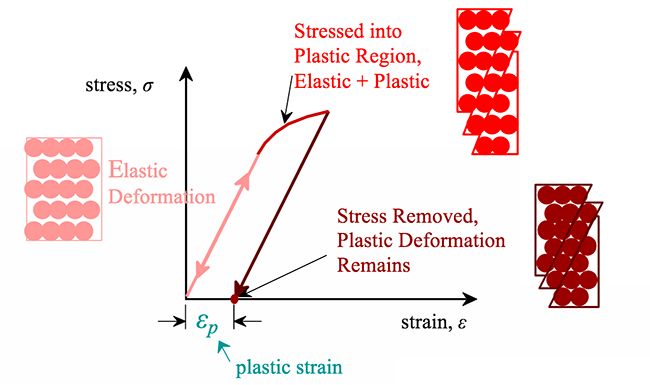 Figure 2 Stress-strain curve
For most metal materials, the stress-strain curve looks similar to the curve shown in Figure 3. When the loading starts, the stress increases from zero, and the strain increases linearly, until the material yields, the curve begins to deviate from the linearity.
Continue to increase the stress and the curve reaches its maximum value. The maximum value corresponds to the tensile strength, which is the maximum stress value of the curve, represented by M in the figure. The breaking point is the point where the material finally breaks, represented by F in the figure.

Figure 3 Schematic diagram of engineering stress-strain curve
The typical stress-strain test device and the geometry of the test sample are shown in Figure 4. During the tensile test, the sample is slowly pulled, and the changes in length and applied force are recorded at the same time, and the force-displacement curve is recorded. The stress-strain curve can be drawn using information such as the original length of the sample, the gauge length and the cross-sectional area.

Figure 4 Stress-strain test
For materials that can undergo tensile plastic deformation, two types of curves are most commonly used: engineering stress-engineering strain curves and true stress-true strain curves. The difference between them lies in the different areas used when calculating the stress. The former uses the initial area of the sample, and the latter uses the real-time cross-sectional area during the stretching process. Therefore, on the stress-strain curve, the true stress is generally higher than the engineering stress.

How to define the plastic deformation of the actual metal in the project?

Figure 10 Work hardening in metal plastic deformation
Finally, talk about strain rate. Generally, the tensile curves of metal materials tested are obtained by testing at a lower strain rate. Only some special metal components need to test their mechanical properties at higher strain rates, that is, components that undergo high-speed deformation. Under normal room temperature conditions, the strain rate is stretched, and the deformation of the material is mainly the slip or twinning of dislocations. 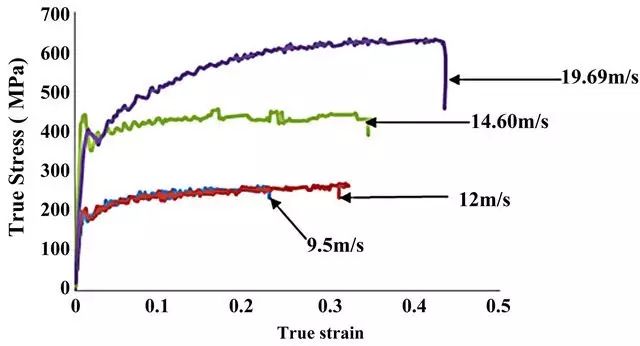