Blackening is a common method of chemical surface treatment. The principle is to produce an oxide film on the metal surface to isolate the air and achieve the purpose of rust prevention. Blackening treatment can be used when the appearance requirements are not high. The surface blackening treatment of steel parts is also called bluing.

A bluing and rust-proof treatment process for the chamfers and ribs of bearing rings. After the heat treatment, the bearing ring is degreasing and degreasing, and then discolored in a mixed solution of sodium hydroxide, sodium nitrite, sodium nitrate and water. The ratio is 2-3:1, and the rest is added with water; the amount of water added is based on temperature It is suitable at 135℃-145℃; time 15-25 minutes; take out the ferrule and rinse it with clean water and then passivate it. Use potassium dichromate solution as the filling liquid for passivation treatment, the concentration of which is 12%-18%; 1-2 minutes at room temperature; after passivation treatment and drying, put it in engine oil or anti-rust oil at 105°C-120°C for 1-3 minutes, take it out after the bubbles disappear completely, and check after leaving for 10-15 minutes. The oxide film produced by this process has stable performance, can protect the chamfer of the ferrule for a long time at room temperature, and the ribs will not rust, and the appearance quality of the bearing is significantly improved.
A3 steel is better with alkaline blackening.
In actual operation, it is necessary to pay attention to the quality of derusting and degreasing before blackening of the workpiece, and the passivation immersion oil after blackening. The quality of blackening often changes due to these processes.

The alkaline bluing process has a history of more than 30 years and has played an important role in the rust prevention of mechanical parts. However, with the development of modern environmental protection heat treatment industry, the “three wastes” produced by this traditional bluing process pollute water and soil. The irritating odor has a stimulating effect on the skin and respiratory mucosa, and the problems of low production efficiency have become more prominent.
In order to realize “green manufacturing”, through collection, investigation and analysis, it is believed that the steam bluing is environmentally friendly, but the heating temperature is high, 60% of the number of parts are not applicable, and the waste heat blackening technology is environmentally friendly and has wide applicability. Further research on its application is of great significance.

The principle of the blackening of iron and steel waste heat is to use the tempering waste heat during the heat treatment process to form a layer of black polymer material protective film on the metal surface according to the thermal polymerization reaction mechanism to achieve the purpose of blackening, rust and corrosion prevention of metal workpieces, Two blackening agents produced by a certain company are selected to test the reliability and applicability.

Select five typical parts for the blackening test, and the scheme is shown in Table 1. 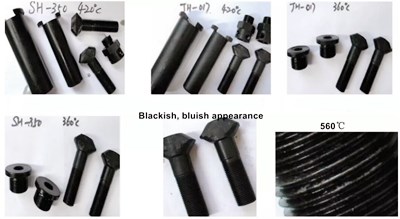 (2) Firmness
The adhesion between the deposition layer of the blackened parts and the substrate is required to have firmness. After the surface protective film is dry, wipe it with cotton yarn. The blackened and blued parts do not show metallic luster. They are qualified products, but blackened parts The firmness is high, as shown in Figure 2a and b.

(3) Rust resistance
The rust resistance and corrosion resistance of the workpiece are mainly affected by the coating and sealing of the organic deposition film on the surface. Choose one black bolt and one blue bolt at 420℃, and pass through the glass after immersing in tap water for 24 hours. It was observed that the two parts were not rusty. After 48 hours, the parts were picked up and dried for observation. The blackened parts had no rust, and the blue ones had slight rust, as shown in Figure 2c.
Through the test, it can be seen that the waste heat blackening process is reliable, and the use temperature is completely suitable for the tempering of our company’s parts at 360~520℃. The process has no irritating smell, does not need pickling or washing, and the process is environmentally friendly and safe.

Batch test to verify the feasibility

The first process suitable for finishing the parts that are directly blackened: material preparation → cleaning → heating → blackening → drying (drying) → oil seal. It is suitable for parts that require quenching and quenching and tempering treatment technology after finishing. Because of tempering above 260℃, surface oil can be removed, and cleaning is not necessary after quenching. Process 2: material preparation → cleaning → quenching → tempering (pre-cooling) → Blackening → drying (drying) → oil seal.

For parts that are blackened according to process two, the furnace must strictly ensure compliance with the carbon potential during quenching and heating to prevent oxidation. Our company has multiple controllable atmosphere multi-purpose furnaces and their matching tempering furnaces, which only need to be equipped with blackening liquid tank and Its cooling and circulation system ensures that the operating temperature is ≤45℃, and one oil tank (with oil control bracket) forms an assembly line operation with the multi-purpose furnace to realize the blackening process operation. Its advantages are simplified configuration and improved efficiency, as shown in Figure 3.

Film formation is an important part of the blackening process. Only when the blackening film is formed and cured can the protective and decorative effects be truly achieved. The residual temperature of the black liquor from the parts is controlled to be 70~90℃. Due to the dry environment in the north, there is no water or parts with little water. Place them in a ventilated environment or blow them with an axial fan. The principle is that the ones that can be dried naturally will not be dried. Parts that cannot be dried can be dried at 120~150℃, and then immersed in N10 total loss system oil. The whole basket of parts are placed on the oil control rack for 24 hours to complete the oil sealing process, which increases the surface brightness and film firmness, and reduces residual oil .

Pin shafts and stud bolts must be separated by wire mesh and have a certain gap to avoid white spots or white lines due to a large amount of accumulation. For single-head bolts, the furnace is loaded in bulk, the furnace load is controlled to be less than 2/3 of the height of the material frame, and the higher outlet water temperature is controlled to facilitate the evaporation of water. This is an innovation in the furnace loading method.
The above process parameters were formulated, and more than 5000 pieces were trial-produced in batches. The effect is shown in Figure 4. 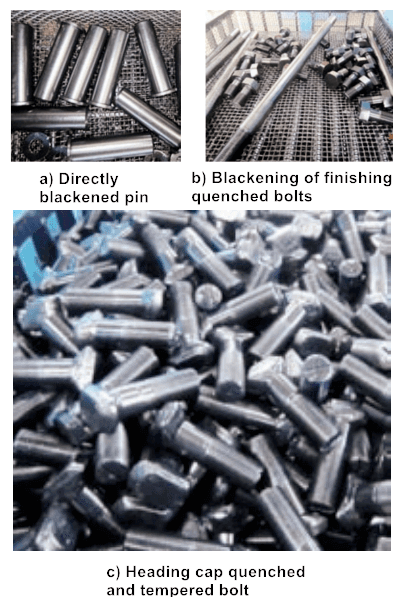 After the successful batch trial production of the waste heat blackening process, four problems were solved during the promotion and application process, thereby replacing the alkaline bluing and realizing “green manufacturing”.

The problem of scale after blackening

After the finishing bolts are blackened, serious oxide scale appears on the surface, which affects the blackened appearance. After reverse inspection, tracking and analysis, for the problem of heating and oxidation caused by low carbon potential in the quenching heating furnace, alkaline blueing must be changed and pickled Remove the traditional concept of oxide scale, strengthen process inspection; to cause secondary pollution to the oxide scale produced by high temperature tempering of other parts, clean the surface oxide scale of the material frame or other high temperature tempered parts before installing the furnace to prevent secondary pollution, Process management must be strengthened. If uncontrollable factors form oxide skin during the heating process, it can be washed with washing oil before turning black.

The problem of raw material corrosion and scale

There are many types of blackening. In addition to the processed surface, there are unprocessed surfaces such as plates, bars, castings, etc. The original rust or oxide skin affects the blackened appearance and anti-rust effect. For parts with low precision, use machinery The shot blasting method is used to clean, and the parts with high precision are removed by mechanical processing.

The problem of water accumulation after blackening

Due to the diversification of the structure of the blackened parts, adopting a reasonable furnace installation method is the key to uniform blackening film and reducing the drying process. The principle of furnace loading is summarized as follows: install the furnace in a way that facilitates the flow of moisture. Pin shafts with holes, the holes are installed downwards, and the moisture can flow out after blacking, and can be dried naturally; the oil plugging holes are stacked neatly downwards; the plate lids are installed vertically to reduce water accumulation and dry in time.

The blackening effect is not ideal

In production applications, it is found that some workpieces have unsatisfactory color after they turn black, and the black film comes off during the trial run of the complete set of products, or the thin flat parts or small screws such as the anti-return pad with a thickness of 3~5mm. Uneven, variegated.
After consulting data and practical verification, reduce the staying time of the workpiece in the groove or shorten the moving distance and shake slowly to promote film formation and improve the curing effect; for a small number of workpieces with thickness or diameter ≤ 4mm, the configuration concentration is 15%~20% The blackening liquid is blackened alone, and the above two measures have achieved good results.

The waste heat blackening process technology does not need alkaline “black boiling”, no three wastes discharge, no irritating odor, environmentally friendly and safe operation, simplified process flow, strong applicability, can replace alkaline bluing, and realize the “green” of the parts anti-rust technology manufacture”. During the production process, the working fluid tank should be maintained in a timely manner, the aging solution should be filtered, the blackening tank dirt should be cleaned regularly, and the blackening liquid MSDS safety technical requirements should be handled.

According to statistics, direct blackened parts accounted for 26.2% of the total blackened parts, quenched and tempered parts accounted for 73.8%, 3 shifts a day, output 0.6t/furnace, while alkaline blue production was 0.2t/basket, and the maximum output was 0.8 t/shift, one shift per day; the two tempering furnaces can be used for blackening and tempering. The efficiency is increased by 200% after calculation.

Calculated based on the maximum production of 296t/year, the manufacturing cost is 717.3 yuan/t, the blackening is 665.8 yuan/t, which reduces the cost by 51.5 yuan/t and saves 15,000 yuan/year; parts do not need to be transferred from the multi-purpose furnace section to the In the blue section, it is estimated that the transshipment cost will be saved by 10,000 yuan/year, and the above two items will save 25,000 yuan/year.