High temperature alloy is an important structural material in aerospace and nuclear industry. Because of its excellent high temperature mechanical properties, it is widely used to make various parts of aeroengine [1]. With the development of aeroengine technology, superalloy has developed rapidly. Inconel 718 is a kind of deformed nickel iron base superalloy, which has high strength, toughness, fatigue resistance and good comprehensive properties, especially under 650 ℃, its mechanical properties have good stability [2-3]. Inconel 718 Alloy is the most widely used high temperature alloy in aeroengine, which is mainly used in rotating parts, gearbox, fastener and other parts of engine. Inconel 718 twelve point head bolt is a fastener widely used in engine, and it is also a representative product of high temperature and high strength fastener.
The technology and application of superalloy materials, especially Inconel 718 Alloy, in the field of Aeronautics and Astronautics have been strictly kept secret in foreign countries. Therefore, the material characteristics and manufacturing process of Inconel 718 Alloy need to be studied by ourselves. Inconel 718 Alloy with the strength grade of 1515 MPa is the most difficult to be processed because of its special treatment during the preparation of raw materials. The higher alloying degree of Inconel 718 Alloy leads to the deterioration of its hot working performance and the reduction of its hot deformation area, which increases the difficulty of hot forming. At the same time, due to the high strength and low plasticity of the material, the tensile strength of Inconel 718 after heat treatment can reach more than 1515mpa, and the hardness is hrc43 ~ 48, which makes the subsequent manufacturing and processing difficult. According to the material and structural characteristics of Inconel 718 12 point head bolt, this paper discusses the key processing technology and manufacturing process of the bolt, and determines the optimal process parameters to realize the batch processing of the product.

The structure of the twelve point head bolt is shown in Figure 1, in which the head is processed by hot upsetting, the rod is processed by grinding, and the thread is processed by rolling. The shape of the bolt head is complex, with a twelve angle wrench structure, which is fully stressed during the wrench and the wrench is not easy to slide off; at the bottom of the twelve angle head, a flange is provided as the bearing part after installation. The bolt processing precision to be studied in this paper is required to be high. Taking – 4 specification products as an example, the bolt manufacturing technology is described. The rod diameter is φ 6.34mm, and the performance requirements are shown in Table 1.

Inconel 718 dowel bolts are bar processed and meet the AMS5662 standard. The main manufacturing process routes are: blanking → hot upsetting → heat treatment → grinding → machining → rolling thread → rounding reinforcement → marking → surface treatment → packaging, in which hot forging, heat treatment, rolling thread is the key process The following will be discussed for these processes.
2.1 Hot upset
The twelve-headed bolt has the characteristics of complicated head shape, large deformation, and difficulty in forming. The lower part of the twelve-point screwing part of the bolt head is the flange surface, and the metal tends to flow to the position with the least resistance during the upsetting, so it is not easy to accumulate inside the cavity during forming, but is outside the flange surface. The accumulation of the flash edges makes it difficult to fill the twelve edges, so the volume distribution during the upsetting and the design of the mold cavity are important. Inconel 718 alloy is a typical process-sensitive alloy with a narrow forging temperature range. Its hot working process, especially forging temperature control, plays a vital role in the quality of forgings [5]. If the heating temperature is too low, the metal fluidity is not enough, and the twelve edges are not filled. If the heating temperature is too high, the metal is prone to overheating and overburning. The bolt head will generate hot cracks. Therefore, the key is to solve the mold design and temperature control problems. .
(1) Mold and upsetting method.
Due to the high strength of the dowel bolts, the Inconel 718 bar used is a high-strength drawing material, so only a single heating upset can be used. According to the upsetting ratio, the volumetric distribution of the deformation of the upsetting die is performed twice, and the shape of the cavity of the initial punching and the second punching die is determined. After the billet is heated, it is initially formed in the initial cavity and the final shape is obtained in the two-flush cavity. In high temperature, Inconel718 superalloy material is very viscous, easy to stick to the mold, affecting the demolding of the forging, and leaving scratches on the surface of the formed head, affecting the surface quality, so before the upsetting The billet is lubricated and the lubricant used should not be volatilized at high temperatures.
(2) Upsetting temperature.
The relationship between strength, plasticity and temperature of Inconel718 superalloy is shown in Figure 2. It can be seen that the plasticity of the material increases at 900 °C, and the material still has good plasticity at 1100 °C. In combination with the temperature range described in Section 1.2, the heating temperature is divided into A, B, C, D, and 4 temperature zones in the interval of 50 °C. The upset forging process is performed separately, and the optimal flaw is determined according to the test results. Forging temperature. The test results are shown in Table 2.

2.3 Rolling thread
Inconel 718 superalloys have a strength requirement of more than 1515 MPa, and their hardness is high, which can reach HRC 43 to 48. The plasticity is poor, and the work hardening caused by the material is severe. If the cold rolling process is carried out, the following problems occur in the processing: First, the life of the rolling wheel is short, and the problem of chipping after rolling a few pieces or dozens of thread blanks (see Fig. 4); The pressing parts are prone to cracks, excessive folding and other defects (as shown in Figure 5), which are not suitable for mass production and cannot meet the quality requirements of the products. In response to the above problems, it was decided to machine the thread by means of warm rolling. After the material is heated, the strength is reduced, the work hardening phenomenon is alleviated, the fluidity is enhanced, and the roll forming is easy, and the problem of chipping and thread quality of the rolling wheel can be effectively solved. In the hot rolling thread process, rolling parameters such as rolling temperature, rolling pressure, rolling time, and thread blank size are the key to manufacturing process control and need to be determined by process tests.
After the bolt is heated, the thread size is checked by a micrometer, a profile measuring instrument and a threaded stop gauge, and the thread flow line is confirmed by metallographic analysis. After the thread is cooled by warm rolling, it usually produces a rebound of 0.02~0.04mm, which is different from the cold rolling, so it needs to be compensated for the temperature rolling.

(a) Comparison of tensile strength

3.1 Appearance dimensions and metallurgical properties
The final finished Inconel 718 twelve-head bolt is shown in Figure 6. Product standards and specifications require bolt size and surface roughness to meet the requirements of the drawings. There should be no cracks, burrs, scratches, dents and other mechanical damage on the surface; the head and thread grain flow lines are continuous, the microstructure is free of cracks and Inclusions, there are no defects such as folding and hairline on the bottom and sides of the thread. After testing, the dimensions and surface quality of the developed parts are qualified, and the metallurgical characteristics also meet the requirements of technical specifications.

Fig.6 Finished product
3.2 Mechanical performance test
According to the requirements of the product specifications, the Inconel 718 twelve-head bolt test includes: tensile test, double shear test, fatigue test, high temperature tensile, stress damage. The test method is based on GJB 715, and the test machine is equipped with a special test fixture for testing. The test data is shown in Table 3. the result shows,
The mechanical properties of the bolts meet the requirements of the specification.

This paper introduces the material and structural characteristics of the Inconel 718 twelve-head bolt, and analyzes the key points and difficulties of hot forging, heat treatment and rolling thread. The following conclusions are obtained through the process test. 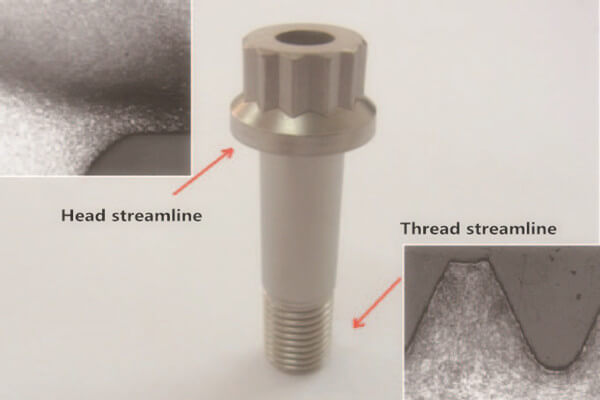