The double-layer coiled pipe is made by forming machine, which coils the double-sided brazed strip steel 720 degrees along the direction of bandwidth, and then solders the tube into a whole through heating device – steel pipe. According to the continuous forming and brazing process, the production process of double-layer coiled pipe can be divided into continuous and semi-continuous. The continuous production line has compact structure, fast production speed and easy to realize automatic control. As shown in Figure 1, the continuous pipe production line is mainly composed of uncoiler, forming unit, brazing furnace, cooling pipe, tractor, straightening roll system, eddy current flaw detector and coiler.

1-uncoiler; 2-forming unit; 3-brazing furnace; 4-cooling pipe; 5-primary tractor; 6-vertical straightening device;
7-eddy current flaw detector; 8-level straightening device; 9-secondary tractor; 10-pneumatic calibration device; 11-winder
Fig. 1 Pipe production line structure sketch
When the production line is in operation, the double-sided copper-plated steel strip placed on the uncoiler enters the forming unit under the action of traction and rolls 720 degrees from the forming roll system to form a double-layer coiled pipe barrel. After sizing by the mandrel and roller, it enters the resistance direct-heating brazing furnace, and the copper between the tube barrels melts and penetrates into each other at 1200 ℃. After cooling, the double-layer coiled pipe comes out firmly. After the furnace, the eddy current flaw detector is driven by a tractor to inspect the welding quality. The defect is marked automatically by the calibration device. Finally, the coiled pipe is automatically discharged on the coiler. The tractor adopts closed-loop DC speed regulation to ensure the stability of pipe speed and the continuous operation of the production line. During flaw detection, the welded pipe forms multiple fulcrums under the action of the front and rear vertical and horizontal straightening wheels. At the same time, the welded pipe is tensioned by the tension of the secondary traction device without shaking, which ensures the normal eddy current detection.

Figure 2 Forming process of double-layer coiled pipe
2.2 Brazing
As shown in Figure 3, the brazing device is mainly composed of heating zone, welding zone, pressure roll, heat preservation and cooling zone, electrodes, etc. The tube supplied by the forming machine enters the well-insulated brazing chamber through sliding electrode at a certain speed and contacts with rolling electrode. The tube between the two electrodes forms a circuit through the electrode and power supply. During the operation of the tube from sliding electrode to rolling electrode, the tube is gradually heated and reaches the highest temperature when it reaches the positive electrode, i.e. brazing temperature. At this time, there is no need to impose any external load on the tube, because copper has good liquid fluidity and rapid diffusion in steel, it will be firmly bonded between layers after cooling. The key is the temperature control in the furnace and the anti-oxidation of the surface coating. Brazing is carried out in the reducing atmosphere of the conduit and the protective gas is hydrogen [3,4]. 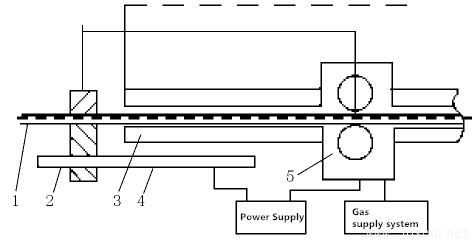 1-Welded Pipe; 2-Sliding Electrode; 3-Welded Cavity Insulation Tube;
4-sliding electrode support rod; 5-rolling electrode
Fig. 3 Structure sketch of brazing device
When the steel pipe comes out of the heating section of the brazing furnace and enters the cooling zone, it is cooled in the furnace under the protective atmosphere. At this time, the copper layer between the layers and the surface begins to solidify. The surface temperature of the steel tube at the exit of the cooling zone should be reduced to about 100 C before it can be discharged from the furnace, so as to avoid the oxidation discoloration of the copper coating due to the contact with air (the oxidation temperature of copper is about 350 ℃). The annealing quality of finished pipes can be guaranteed by using furnace cooling, air cooling and water cooling.

3. Detection and Control of Technological Parameters

3.1 Process parameters
In order to meet the requirements of dimension accuracy and surface quality of double-layer coiled pipe, improve the welding quality and performance of the product, and reduce the reject rate, the process parameters are strictly controlled in the whole production process. The key points of control are diameter pressure, brazing temperature and running speed.