2017-09-20
Butterfly valve has been around for a long time, and are used for a variety of applications. They made their first appearance during the 1930s, and have been utilized by several industries ever since. Often made out of cast iron, butterfly valve’s name is based from the functionality of its disc. There are a few different types of butterfly valves, however, they fall into two basic types: lug butterfly valves and wafer butterfly valves.

Butterfly valves are classified as “quarter-turn” valves. When the metal disk that’s part of the valve’s design is rotated a quarter of a turn, it opens or closes. The disk, referred to as the “butterfly” is attached to a rod. When the butterfly valve is opened all the way, the disc rotates (a 1/4 turn), allowing for a nearly unrestricted passing of the fluid. You can also open the valve gradually to reduce flow. Turning the butterfly (disk), to close the valve, blocks the passage of the fluid. This is due to the disc always being perpendicular or parallel to the flow, resulting in a pressure decrease regardless of the position it is in. 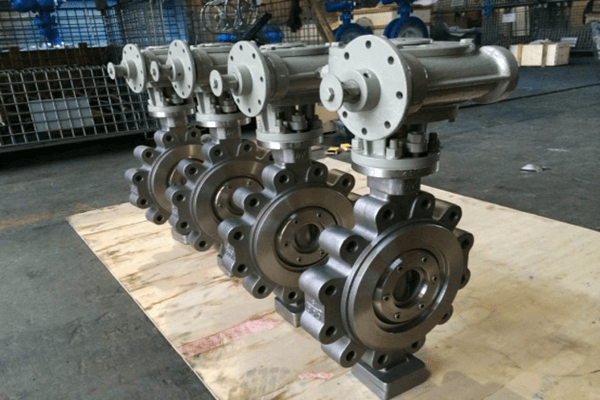 The lug version of the butterfly valve’s design is similar to a 3-piece ball valve in that one end of the line can be taken off without having an effect on the opposing side. This can be executed by using threaded inserts, flanges, along with two sets of lugs (bolts) that don’t utilize nuts since each flange features its own bolts. It’s also important to note that you don’t need to shut down the entire system in order to clean, inspect, repair, or replace a lug butterfly valve (you would need to with a wafer butter valve). A wafer butterfly valve‘s function is to retain a seal to protect against dual-directional pressure differential in the flow of fluid. In other words, the wafer version of butterfly valves was designed to hold a tight seal, safeguarding against bi-directional pressure differential in order to avoid any backflow in systems that have been manufactured for uni-directional flow. This is accomplished by using a tightly fitted seal, such as an O-ring, gasket, precision machined, along with a flat valve face on the downstream and upstream sections of the valve.

Both lug butterfly valves and wafer butterfly valves are used in a number of applications for industrial sectors that include food processing, pharmaceutical, chemical, oil, water as well as waste water management. The valves utilized in these industries are generally manufactured in compliance with the “Pharmaceutical Quality/Manufacturing Standard”, cGMP (current good manufacturing practice) guidelines. Butterfly valves for the most part have replaced ball valves in a lot of industries. This is especially the case for those dealing with petroleum because of they are less expensive and easy to install. It’s important to note that pipelines that contain butterfly valves can’t be “pigged” for cleaning. “Pigging” is the process of making use of devices referred to as “pigs” to carry out a variety of maintenance operations.