According to the regulations for maintenance and repair of refinery equipment stipulated by the Ministry of chemical industry of raw materials and fuels, the repair contents of high, medium and low pressure valves for oil products, steam, water and various gases with nominal pressure lower than pnl6mpa and medium temperature lower than 550 ℃ can be divided into three categories: minor repair, medium repair and major repair.

The repair items included are as follows:

In the indoor repair of the valve, in general, minor repair more common, but also should be disassembled to check and replace the gasket.

Valve maintenance under pressure is a complex, dangerous and technical work. In addition to being bold, careful and decisive, the maintenance of valves under pressure should also have a strict scientific attitude. Especially in explosive, highly toxic, high temperature, high pressure, radioactive and other media plugging work, it should be carried out in strict accordance with the pre-determined scheme and relevant safety regulations.
When maintaining the valve under pressure, pay attention to the following items:

Assembly and disassembly of valve

Assembly and disassembly of threaded connection

In addition, there are two methods to prevent the valve from loosing, one is the fixing method of saddle screw, the other is the point riveting method, both of which are used in the occasion of infrequent disassembly. Point riveting method is to rivet two or more points on the thread of the nut and bolt, so that the thread can be squeezed and deformed to achieve the purpose of anti loosing. If the nut is loose, it is difficult to solve with the above methods, the bonding method can be used. 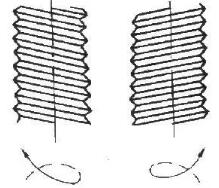 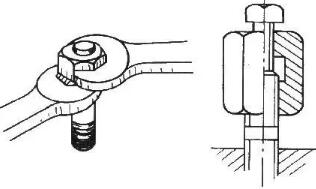 The method of disassembling and assembling the stud bolt by tightening the double nuts together. When the stud bolt is to be removed, the upper spanner will tighten the upper nut on the lower nut, and the lower spanner will turn the nut counterclockwise, and the bolt will be screwed out. If the stud bolt is reversed (left-handed), the upper wrench shall tighten the nut, and the lower wrench shall screw the nut out of the bolt clockwise; When the stud bolt is to be assembled on the valve piece, the lower wrench compresses the lower nut, and the upper wrench rotates the upper nut clockwise to tighten the stud bolt on the valve body. If the stud is anti thread, the lower wrench can compress the lower nut, and the upper wrench can rotate the upper nut counterclockwise to tighten the stud.
Another way to tighten the stud is to use a special nut with a screw on it. The internal thread of the nut is the same as that of the stud. When in use, screw the stud into the nut and tighten the screw, then screw the nut to turn the stud.
② Removal method of rusted bolt and nut
Before removing the rusted and corroded bolts and nuts, soak them with kerosene and find out the screw direction, then slowly loosen about 1 / 4 and return to the original position; In this way, the bolt can be gradually screwed out by repeatedly advancing and retreating for several times. You can also use a hammer to knock around the bolt and nut to loosen the thread, and then loosen the bolt and nut (but in the process of knocking, do not knock the thread). Nuts that are difficult to disassemble by knocking can be heated by blowtorch or oxyacetylene flame to expand the nuts and screw them out quickly. For the stud bolts that are difficult to remove, after being soaked with kerosene, the pipe clamp can be used to screw them out at the position of the middle polished rod.
③ Disassembly method of broken bolt
The bolt is broken in the screw hole, which is a troublesome thing in disassembly.
Several methods of screwing out broken end bolts.

Before using the above screwing out method, some conventional measures should be taken, such as soaking with kerosene and removing oil and rust on the surface (this is especially important for the screwing out method of spot welding, otherwise the welding will not be firm). If necessary, heat around the bolt and screw out the bolt under thermoplastic condition. Chemical corrosion method can also be used to screw out the broken bolts. Properly cleaning the rusted and corroded bolts and screw holes will speed up the screw out of the broken bolts (after screwing out the bolts, the screw holes shall be washed with water to avoid residual chemical corrosion of the valve).
(4) Tightening sequence of bolts
During valve assembly, the tightening degree and sequence of bolts have a direct impact on the assembly quality. For general bolt tightening is easier to do, the connector is not loose. However, the bolts of gasket and packing structure should be tightened first and then, symmetrically and evenly, and in turn. When each bolt is tightened properly, check whether the flange is skewed, and measure whether the gap between the flanges is consistent, so as to correct. Then tighten the bolts symmetrically and in turn, with a small amount of tightening, about 1 / 4 ~ 1 / 2 turn each time, until the required preload. Special attention should be paid not to screw too tightly, so as not to crush the gasket. Generally, it is subject to no leakage. Finally, check the flange clearance, which should be consistent and kept at more than 2mm.
The tightening sequence of bolts is shown in the figure. 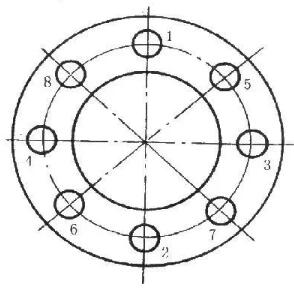 Key connection forms include flat key, sliding key (guide key), inclined key (wedge key), semicircular key (crescent key) and spline. The figure shows the assembly form of key connection.
(1) Flat key
Flat key is widely used in valve, its cross-section shape is square and rectangular. Before assembling the flat key, the keyway should be cleaned, the edge of the key should be trimmed, the fit size and precision of the key should be repaired, and the round heads at both ends of the key should be filed. During assembly, the two sides of the key shall have slight interference, the top surface of the key shall have clearance with the hub, and the bottom surface of the key shall contact with the bottom of the shaft keyway. The assembly can be done by tapping with a hammer or clamping the flat key slowly with a vise to install it into the keyway of the shaft. During assembly, the copper sheet is used as a cushion to avoid damaging the shaft and key.
When the flat key is disassembled, the wheels should be removed first. The two ends of the flat key can be pulled up with tools such as a driver, or the two sides of the flat key can be wrapped with thin copper sheet, and the flat key can be clamped and pulled out with steel wire pliers or vice.
(2) Slide key
Sliding key is actually a special form of flat key. It can not only drive the hub to rotate, but also make the shaft and hub move relative. It is used in the clutch mechanism of transmission device and grinder. The sliding key can be assembled on the shaft or on the hub. The sliding key and its assembled keyway shall be closely matched without looseness, and fixed with countersunk screws. There should be a certain gap between the sliding key and its opposite sliding keyway on both sides and the top surface.
Except for the countersunk screw, the assembly and disassembly method of the sliding key is the same as that of the flat key. The countersunk screw shall be tightened and not loose, and shall be lower than the sliding key surface.
(3) diagonal key
The inclined key is similar to the flat key, but its top surface is inclined, with a slope of 1:100, and has a key head for disassembly. When assembling oblique key, the edge should be removed, and the fitting accuracy of key and groove should be repaired; Then, align the hub and shaft sleeve with the keyway, insert the inclined key with the inclined surface painted color into the groove, and check the contact surface. The contact surface shall not be less than 70%. If it is less than 70%, it shall be scraped and corrected. Finally, apply a layer of white lead oil on the inclined key and drive the inclined key into the groove. The tools used for the removal of the inclined key include the inclined key puller and the inclined key dial.
(4) semicircular key
The semicircular key is used on the shaft with smaller diameter and tapered shaft, which can automatically adjust the inclination in the keyway. Semicircle key assembly and disassembly method is similar to flat key.
(5) spline
Spline like a pair of internal and external meshing gear, high machining accuracy, large torque transmission, rarely used in the valve.