Globe valves, also known as shutoff valves, belongs to forced sealing valves, so when the valves are closed, pressure must be exerted on the disc to force the sealing surface not to leak. When the medium enters the valve from below the disc, the resistance to be overcome by the operating force is the friction between the stem and packing and the thrust generated by the pressure of the medium. The force to close the valve is greater than the force to open the valve, so the diameter of the valve stem is larger, otherwise the failure of the top bending of the valve stem will occur. There are three kinds of connection modes: flange connection, thread connection and welding connection. After the appearance of self-sealing valve, the medium flow direction of globe valve changes from above the disc to enter the valve chamber. Under the action of medium pressure, the force of closing the valve is small, while the force of opening the valve is large, and the diameter of the stem can be reduced accordingly. At the same time, under the action of medium, this form of valve is also more tight. Our country’s valve “three-way feed” once stipulated that the flow direction of globe valve should be from top to bottom. When the globe valve is opened, the opening height of the disc is 25%-30% of the nominal diameter. The flow rate has reached the maximum, indicating that the valve has reached the full open position. Therefore, the full open position of the globe valve should be determined by the stroke of the disc.

The opening and closing parts of stop valve (globe valve) are plug-shaped discs with a flat or sea cone on the top of the seal, and the disc moves in a straight line along the center line of the seat. The movement form of the valve stem (common name: concealed rod) can also be used to control the flow of air, water, steam, various corrosive media, mud, oil, liquid metal and radioactive media. Therefore, this type of cut-off globe valve is very suitable for cutting off or regulating and throttling. Because the stem opening or closing stroke of this kind of valve is relatively short, and has a very reliable cut-off function, and because the change of the seat opening is proportional to the disc travel, it is very suitable for flow regulation.

The application range of globe valves and gate valves is determined by their characteristics. In smaller channels, globe valves are often used when better shut-off sealing is required; in steam pipes and large diameter water supply pipes, gate valves are usually used because of less fluid resistance.

Scope of use of globe valves

Types and Classification of Globe Valves

Globe valves, also known as gate valves, are the most widely used type of valves, mainly composed of body, disc, cover and stem. The body and cover are pressure components, and the disc and stem are internal components. Globe valve is a valve in which the closure (valve) moves along the center line of the seat. According to the movement form of the flaps, the change of seat opening is proportional to the flaps travel.

According to the structure of the valve body, the globe valve can be divided into right angle type, straight type and direct current type.

According to its channel position, it can be divided into straight-through type and right-angle type.

The working principle of electric globe valve is to make the valve unblocked or blocked by the love of rotary valve. Gate valve switch is light, small, can be made into a large caliber, reliable seal, simple structure, easy maintenance, sealing surface and spherical surface are often in closed state, not easy to be eroded by media, widely used in various industries.

When closed, turn the handwheel clockwise, the stem begins to drop and the ball starts to rotate away from the seat.
Continue to rotate the handwheel, and the stem is acted by the guide pin embedded in the upper spiral groove, so that the stem and the gate rotate 90 degrees at the same time.
The gate has rotated 90 degrees without contact with the seat when it is about to close.
In the last few turns of the handwheel rotation, the angular plane at the bottom of the stem mechanically wedges the sphere so that it is pressed tightly on the seat to achieve complete sealing.

With the rising labor costs, more and more enterprises hope to reduce the labor force. With such BELLOWS GLOBE valves, workers can switch more easily, products with longer service life and better sealing performance can be used. It is reasonable to believe that its prospects will be more and more broad.

The Difference and Advantages of Globe Valve and Ball Valve

Gate valves and globe valves are shutoff valves, and are the two most common types of valves. They are different in many ways. For example, the globe valve is a rising stem, and the handwheel rotates and rises with the stem. Gate valves are hand wheels rotating and stem rising. Now let’s take a look at the difference between globe valve and gate valve. What are the advantages and selection principles of globe valves?

What is the difference between globe valve and gate valve?

For globe valves, not only installation and maintenance, but also operation.
Open and close globe valve, force should be smooth, not impact. Some parts of high-pressure globe valves with impact opening and closing have considered that the impact force is not equal to that of general globe valves.
When the globe valve is fully open, the handwheel should be reversed a little to tighten the threads so as to avoid loosening damage.
When the pipeline is first used, there are many internal dirt, so it can open the globe valve slightly, flush it away by using the high-speed flow of medium, then close it gently (can not close quickly, close sharply, in order to prevent residual impurities from injuring the sealing surface), open it again, so many times, clean dirt, and put it into normal work.
Often open the shutoff valve, the sealing surface may stick dirt, when closed, also use the above method to wash it clean, and then formally closed.
If the handwheel and handle are damaged or lost, they should be matched immediately, and can not be replaced by movable winding plate hand, so as to avoid damaging the four sides of the valve stem and failing to open and close, so as to cause accidents in production.
In some media, when the shutoff valve is cooled and the valve shrinks, the operator should close it again at an appropriate time so that no slits are left on the sealing surface. Otherwise, the medium will flow through the slits at high speed and easily erode the sealing surface.
When operating, if it is found that the operation is too arduous, the reasons should be analyzed. If the packing is too tight, it can be relaxed properly. If the valve stem is skewed, the repairman should be notified. In some globe valves, when in closed state, the closing parts are heated and expanded, which makes it difficult to open. If it must be opened at this time, the cover threads can be screwed half to one turn to eliminate the stem stress, and then the plate operates the handwheel.

In operation, all kinds of valves should be complete and intact. Bolts on flanges and brackets are indispensable. Threads should be intact and intact. No loosening is allowed. The fastening nuts on the handwheel should be tightened in time if loosening is found, so as not to wear the connection or lose the handwheel and nameplate. If the handwheel of globe valve is lost, it is not allowed to be replaced by a live wrench. It should be matched in time. Packing gland is not allowed to be skewed or without pre-tightening clearance. For globe valves in environments susceptible to rain, snow, dust, sand and other contaminants, the valve stem should be equipped with a protective cover. The gauge on the globe valve should be complete, accurate and clear. Lead seals, caps and pneumatic accessories of globe valves should be in good condition. It is not allowed to knock, stand or support heavy objects on globe valves in operation; especially non-metallic valves and cast iron valves, it is more important to prohibit the maintenance work during grease injection of valves before and after welding, which plays a vital role in the service of valves in production and operation. Correct and orderly and effective maintenance will protect valves and make valves safe. Function normally and prolong the service life of the valve. Valve maintenance seems simple, but it is not. There are often neglected aspects of work.
First, when globe valve is injected with grease, the problem of the amount of grease injected is often neglected. After oil filling, the operator chooses the valve and the connection mode for oil filling, and then carries on the oil filling operation. There are two situations: on the one hand, less grease injection and insufficient grease injection, and the sealing surface accelerates wear due to lack of lubricant. On the other hand, excessive fat injection causes waste. Because there is no accurate calculation of sealing capacity of different globe valves according to the type and type of valves. Sealing capacity can be calculated according to the size and type of globe valve, and a reasonable amount of grease can be injected.
Secondly, pressure is often neglected in grease injection of globe valves. During the operation of lipid injection, the pressure of lipid injection varies regularly from peak to valley. The pressure is too low, the seal leaks or fails, the pressure is too high, the grease injection mouth is blocked, the inner grease of the seal is hardened or the seal ring is locked with the valve ball and the valve plate. Usually when the pressure of grease injection is too low, the grease injected into the bottom of the valve chamber, usually occurs in small gate valves. The pressure of grease injection is too high, on the one hand, check the grease injection nozzle, such as the identification of the blockage of the grease hole for replacement; on the other hand, lipid hardening, to use cleaning fluid, repeatedly soften the failed sealing grease, and inject new grease replacement. In addition, sealing type and sealing material also affect the grease injection pressure. Different sealing forms have different grease injection pressure. Generally, the grease injection pressure of hard seal is higher than that of soft seal. Ball valve maintenance is generally in the open state, in special cases choose to close maintenance. Other valves cannot be treated as open valves. Gate valves must be closed during maintenance to ensure that grease is filled with sealing grooves along the sealing ring. If opened, the grease will fall directly into the flow channel or valve chamber, causing waste.
After installation, the globe valve shall be inspected regularly. Main inspection items are as follows: 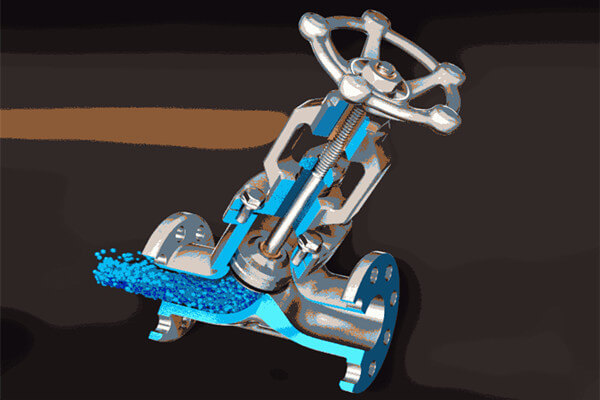