The shape of the valve plug can be cylindrical or conical. In a cylindrical plug, the passage is usually rectangular; in a conical plug, the passage is trapezoidal. These shapes make the structure of the plug valve lighter. It is most suitable for use as cutting and connecting medium and shunting, but sometimes it can also be used for throttling according to the applicable nature and erosion resistance of sealing surface.
The plug valve is a kind of through valve with fast switching. It can also be used in the medium with suspended particles because of the wiping effect of the movement between the rotary sealing surfaces and completely preventing contact with the flowing media when it is fully opened. Another important feature is that it is easy to adapt to multi-channel structure, so that a valve can obtain two, three, or even four different channels. This can simplify the design of the pipeline system, reduce the use of valves and some of the connecting parts needed in the equipment.

Plug valves are one of the most widely used valves for both on/off and throttling services. Their design is fairly simple. Plug valve is comprised of three main parts: body, cover and plug. The plug is a cylindrical, tapered, or generally cone-shaped device that can be rotated inside the valve body to control flow through the valve. The plugs have one or more hollow passageways going sideways through the plug, so that fluid can flow through the plug when the valve is open. The valve is opened by rotation, with the plug itself being the only element that is capable of movement. Plug Valve is simple and often economical. Early models of plug valve used metal-to-metal seals that were nonlubricated. This design is still used, but problems with galling and sticking limit their usefulness.
In order to expand the application range of plug valve, many new structures have been developed. lubricated plug valve is the most important type. The use of lubricant between the plug face and the seat eliminates most of these problems. The lubricant helps to control leakage around the plug, and reduces wear between the valve contact surfaces, and slightly lifts the plug to reduce the operating torque required to operate the valve.
A plug with a through hole is used as a valve for opening and closing parts. The plug body rotates with the valve stem to realize the opening and closing action. Small plug valves without packing are also called “Coke”. The stoppers of the plug valve are mostly conical (or cylindrical) and are combined with the conical orifice of the valve body to form a sealing pair. plug valve is the earliest valve, which has simple structure, fast switching and low fluid resistance. Ordinary plug valves are sealed by the direct contact between the finely machined metal plug and the valve body, so they have poor sealing performance, large opening and closing force and are easy to wear and tear. They can only be used in low pressure (not higher than 1 MPa) and small caliber (less than 100 mm).

The passage of the plug valve 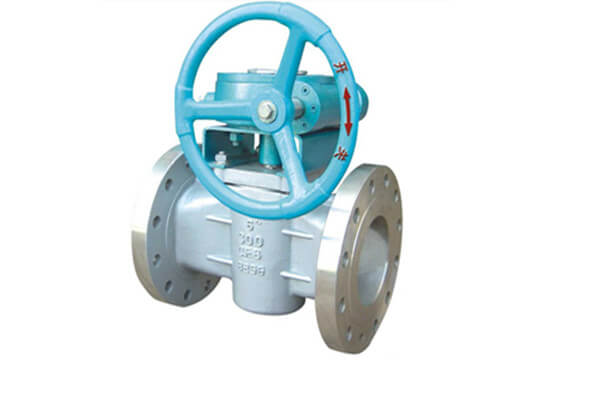