What are the corrosion of metal materials used in pressure pipeline?

What are the corrosion of metal materials used in pressure pipeline?

According to the mechanism of corrosion

Classification according to corrosion morphology

According to the types of corrosion, it can be divided into three categories: total corrosion, local corrosion and stress corrosion.

① Pitting corrosion, also known as pitting corrosion, is called pitting corrosion. The diameter of the etch hole is equal to or less than the depth.
② Pitting corrosion is one of the most destructive and hidden corrosion forms of pipelines. Pitting corrosion of austenitic stainless steel pipeline is most likely to occur when conveying medium containing chloride ion or bromine ion. If the outer wall of stainless steel pipe is often wetted by sea water or natural water, pitting corrosion will also occur because there are certain chloride ions in seawater or natural water.
③ The pitting process of stainless steel can be divided into two stages: the formation of pitting and the development of pitting.
As a pitting source, the incomplete parts of the passive film (such as exposed dislocations, surface defects, etc.) are active in a certain period of time, and the potential becomes negative. A micro cell is formed between the passivation film and its adjacent surface, which has a large cathode and small anode area ratio, which makes the metal in the pitting source rapidly dissolve and the etch hole begins to form.
As the corrosion continues, the etched holes are formed. The excess positive charge accumulated in the pores caused the migration of Cl – from the outside to keep neutral, and then the chloride concentration in the pores increased. Due to the hydrolysis of chloride, the solution in the hole is acidified, which further accelerates the dissolution of anode in the hole. As a result of this autocatalytic action, the etch hole is continuously developed to the depth, as shown in Fig. 1. 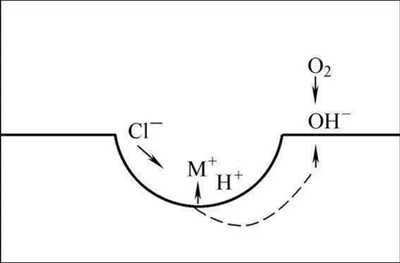 Also known as erosion corrosion. When the corrosive fluid suddenly changes direction in the elbow, tee and other turning parts, it will cause mechanical erosion damage to the metal and the passive film or corrosion product layer on the metal surface, and at the same time, it will cause severe corrosion damage than other parts of the metal surface.
This kind of damage is that the metal is separated from the metal surface by its ions or corrosion products, rather than by solid metal powder like pure mechanical wear.
If there are bubbles or suspended solids in the fluid, it is easy to wear and corrosion. The corrosion resistance of passive film of stainless steel is poor, while that of titanium is better. The steam system and h2s-h2o system have serious wear and corrosion on carbon steel pipe elbows and tee joints.

The stress corrosion cracking (SCC) of stainless steel (H2SxO6, x = 3-5) has attracted much attention. When the pipeline is in normal operation, it is corroded by hydrogen sulfide. When the pipeline is shut down for maintenance, it reacts with oxygen and water in the air to form H2SxO6. Stress corrosion cracking (SCC) occurs in the parts of Cr Ni austenitic stainless steel pipe with high residual stress (weld heat affected zone, elbow, etc.).

① The stress corrosion cracking of metals in the medium containing hydrogen sulfide and water is called sulfide corrosion cracking. In natural gas, oil collection, processing and refining, petrochemical and chemical fertilizer industries, sulfur cracking accidents often occur in pipelines and valves. The time required for sulfur cracking varies from a few days in a short period to several months to several years in a long time. However, no sulfur cracking has occurred in more than ten years.
② The cracks of sulfur cracking are coarser and have fewer branches. Most of them are transgranular, and there are intergranular or mixed types. The concentration of hydrogen sulfide required for sulfur cracking is very low, which can occur only slightly more than 10-6 or even less than 10-6.
Carbon steel and low alloy steel are the most sensitive to sulfur cracking in the temperature range of 20 ~ 40 ℃. Sulfur cracking of austenitic stainless steel mostly occurs in high temperature environment. With the increase of temperature, the sulfur cracking sensitivity of austenitic stainless steel increases.
In the medium containing hydrogen sulfide and water, if acetic acid, carbon dioxide and sodium chloride, or phosphine, or arsenic, selenium, antimony, tellurium compounds or chloride ions are contained at the same time, the sulfur cracking of steel will be promoted.
The sensitivity of 304L and 316L stainless steels to sulfur cracking is as follows: H2S + H2O < H2S + H2O + Cl – < H2S + H2O + Cl – + O2 (the sensitivity of sulfur cracking is from weak to strong).
For carbon steel and low alloy steel, the microstructure of quenching and tempering is the best, and the microstructure of non tempered martensite is the worst. The sulfur cracking resistance of steel decreases in the order of quenching + tempering → normalizing + tempering → normalizing → tempering martensite.
The higher the strength of steel, the more likely sulfur cracking occurs. The higher the hardness of the steel, the easier sulfur cracking occurs. In the accident of sulfur cracking, the welding seam, especially the fusion line, is the most prone part to crack, because the hardness here is the highest.
NACE strictly stipulates the hardness of carbon steel weld: ≤ 200hb. This is because the distribution of weld hardness is more complex than that of base metal, so the requirement of weld hardness is stricter than that of base metal. On the one hand, it is due to the effect of welding residual stress, on the other hand, it is the result of hardening structure in weld metal, fusion line and heat affected zone. In order to prevent sulfur cracking, it is necessary to carry out effective heat treatment after welding.

It mainly occurs in the medium containing wet hydrogen sulfide. In this environment, not only the general corrosion of steel will occur due to the anodic reaction, but also the adsorption of S2 – on the metal surface will hinder the hydrogen atom from combining with the hydrogen molecule, thus promoting the hydrogen atom to penetrate into the metal.
When hydrogen atoms permeate and diffuse into the steel, the defects such as cracks, delamination, voids and slag inclusion are encountered, and then they gather together to form hydrogen molecules, causing volume expansion, and generating a great pressure (up to hundreds of Mpa) in the steel.
If these defects are near the surface of the steel, they will form bubbles; if they are deep inside the steel, they will form induced cracks. They are parallel cracks along the rolling direction and connected by short transverse cracks to form a “ladder”.
Hydrogen induced step cracks cause steel embrittlement in light cases, and reduce effective wall thickness to overload, leakage and even fracture of pipelines in severe cases.
Hydrogen bubbling requires a critical concentration of hydrogen sulfide. It has been reported that hydrogen bubbling will occur when hydrogen sulfide partial pressure is 138pa. If there are phosphine, arsenic, tellurium and CN – in the wet hydrogen sulfide medium, it is favorable for hydrogen to penetrate into the steel. They are all accelerating agents for hydrogen permeation.
Hydrogen bubbling and hydrogen induced step cracks usually occur on the pipe made of steel plate.
② Hydrogen embrittlement.
No matter what way hydrogen enters into steel, it will cause steel embrittlement, that is, elongation and reduction of area decrease significantly, especially for high strength steel. If the hydrogen in the steel is released (such as heating for dehydrogenation), the mechanical properties of the steel can still be recovered. Hydrogen embrittlement is reversible.
Hydrogen permeation can be carried out in h2s-h2o corrosive carbon steel pipeline at room temperature, and also in high temperature and high pressure hydrogen environment; hydrogen permeation can be carried out in acid pickling process without adding corrosion inhibitor or improper inhibitor, and it can also be penetrated when welding in rainy days or excessive cathodic protection.
③ Decarbonization.
In the industrial hydrogen production plant, high temperature hydrogen pipeline is easy to produce carbon damage. The cementite in steel reacts with hydrogen to form methane at high temperature
As a result of the reaction, the cementite in the surface layer decreases, and the carbon gradually diffuses from the adjacent unreacted metal layer to the reaction zone, and the metal layer with a certain thickness becomes ferrite due to lack of carbon. The results of decarburization reduce the surface strength and fatigue limit of steel.
④ Hydrogen corrosion.
The mechanical properties of steel are deteriorated, and the strength and toughness are obviously reduced after being subjected to high temperature and high pressure hydrogen. This phenomenon is called hydrogen corrosion.
The process of hydrogen corrosion can be roughly divided into three stages: in the incubation period, the properties of steel do not change; in the stage of rapid change in properties, decarburization and crack propagation rapidly; in the final stage, carbon in the solid solution has been exhausted.
The incubation period of hydrogen corrosion is important, which often determines the service life of steel.
There is an initial temperature of hydrogen corrosion under a certain hydrogen pressure, which is an index to measure the hydrogen resistance of steel. Below this temperature, the reaction rate of hydrogen corrosion is very slow, so that the incubation period exceeds the normal service life. The temperature of carbon steel is about 220 ℃.
The hydrogen partial pressure also has a starting point (about 1.4mpa for carbon steel), that is, no matter how high the temperature is, below this partial pressure, only surface decarburization will occur without serious hydrogen corrosion.
The combined conditions of temperature and pressure for corrosion of various hydrogen resistant steels are the famous Nelson curve (this curve is available in many standard specifications for the selection of pipeline equipment, such as sh3059 “general rules for selection of equipment for petrochemical pipeline design”).
Cold working deformation improves the diffusion ability of carbon and hydrogen and accelerates the corrosion.
In a nitrogenous fertilizer plant, the high pressure pipeline from ammonia synthesis tower outlet to waste heat boiler has a working temperature of 320 ℃ and a working pressure of 33Mpa. The working medium is mixture of H2, N2 and NH3. Hydrogen resistant steel should be selected according to Nelson curve. One of the short diameter reducing pipes was damaged by hydrogen corrosion due to misuse of common carbon steel, which caused serious accident and heavy loss.