What are the meanings of RC1/8, G3/4 and NPT1/4? What is the difference between BSPT, RC, G and other threads?

What are the meanings of RC1/8, G3/4 and NPT1/4? What is the difference between BSPT, RC, G and other threads?

Yesterday, I did a simple push z-axis, which is used to push a suction device.
This device, after pumping out the waste gas produced by plasma cleaning, rises to the highest point to avoid the higher material on the conveyor belt below it.
The driving stroke is 150 mm, because there is no precision requirement, ± 1 mm is OK.
Therefore, the shaft is driven by double acting cylinder and guided by ordinary single slide linear guide (Use fork sensor to detect whether it has been pushed to the highest position).
Since the cylinder is used, naturally, a simple gas path is involved.
Because we want to keep the suction device at that position for a certain period of time in case of power failure at the highest point, we need a three position five way middle seal solenoid valve ( Plus double side speed control valve (speed control).
Search the system and soon the solenoid valve will be selected.
At first glance, the gas connection is RC1/8. I can’t help thinking of the types and parameters of various gas connections.

For example, in the supplier’s product catalog, there are often NPT1/8, RC3/4, G1/4 and other interfaces.

Table of Contents hide
1 What do these pipe thread interfaces NPT, RC, G, etc. mean? What’s the difference between NPT, BSPP and BSPT?
2 BSPP (British Standard Parallel Pipe)
3 BSPT (British standard pipe tape)
4 How to choose the thread?
5 What is the global application of the two pipe thread systems? 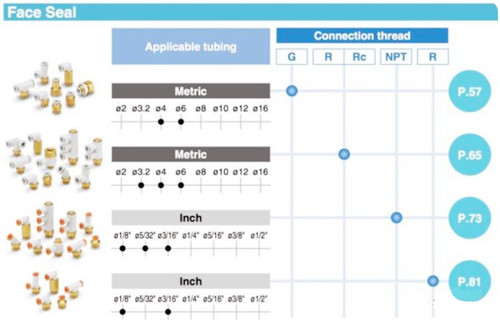 What do these pipe thread interfaces NPT, RC, G, etc. mean? What’s the difference between NPT, BSPP and BSPT?

Speaking of these problems, we have to talk about Wyeth thread.
As we know, the profile angle of ordinary connecting thread is 60 degrees.
This Wyeth thread is different from ordinary thread in that it has a 55 degree profile angle.
Why is it 55 degrees? Originally, there is an interesting thing.
Joseph Whitworth, the inventor of Wyeth thread, established his own machine tool factories along with the wave of British Industrial Revolution.
These different factories, because there is no unified thread standard, manufacture thread according to their own experience, resulting in different sizes, which leads to the interchangeability of thread parts become a problem.
For example, the screw hole at the same position of the same part may not be locked after changing a screw.
As the scale of production continues to expand, Whitworth is aware of this serious problem.
Subsequently, he collected thread samples from different factories, measured size and shape and other data. Based on this, he proposed a unified standard for thread processing, which is the origin of Wyeth thread BSW (British Standard Whitworth) and the first thread standard in the world. 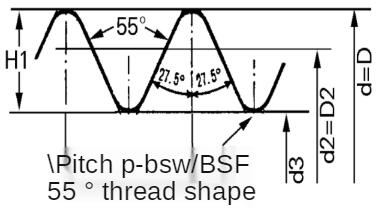 In this standard, the thread profile angle is 55 degrees (BSF = British Standard Whitworth Thread fine).
Although Wyeth thread is not common in nuts and screws nowadays, it has been replaced by unified series and metric series.
However, BSPP (British standard pipe parallel) and BSPT (British standard pipe tape) of 1:16 are developed on this basis, and become international standards (ISO), which have been used up to now.

The letter G is the abbreviation of gas (it comes from German Gewinde, meaning “screw thread”, bloggers prefer the former), because it was used in gas pipeline at first. It is a coincidence that we call G pipe thread because the initials of G and “Guan” are the same.
G thread is divided into internal and external threads, which are used for non sealing connection. The executive standard is BS EN ISO 228-1, and the old standard is BS 2779, which is now invalid.
In addition, the meanings of several common versions of relevant standards are as follows:

What’s more interesting is that in Wyeth thread, it is also stipulated that the top and bottom of the tooth should be made into arc.

Why? This is actually related to Whitt’s keen market insight and technology accumulation.
Because in the beginning, the purpose of building huite factory was to sell machine tools, that is, “hens”, rather than selling the parts processed by machine tools. It may be that he is optimistic about the prosperous industrial revolution driven market.
Therefore, when he submitted the thread standard to the British Industrial Standards Association, he implanted the arc. It can be said that he was very wise and made his own thread become the industry standard.
Of course, at that time, only his family could make this kind of circular tooth top and bottom, which was a good technical barrier. This is inseparable from his industry accumulation of more than 10 years.
Even now, if we want to set up standards in an industry, it is not easy to have strong core competitiveness (not necessarily in terms of technology, but in terms of positioning, brand, etc.), because it is easy to be imitated, copied, and lost in the competition.
From the point of view of use, the arc crown and the tooth base have its advantages. It can reduce the wear of the thread appliance on the crown, and its fatigue strength is better than that of the flat bottom thread. Because of the excessive arc, the stress distribution is optimized.
Later, in order to reduce the difficulty of thread processing, the U.S. changed the profile angle to 60 degrees, and the top and bottom of the tooth to be flat according to this standard. Only then did the U.S. standard pipe threads NPT and npsc: National pipe tape thread and national pipe straight coupling thread come into being.
So now, as far as pipe thread is concerned, two pipe thread standard systems with ISO standard as one side and American Standard as the other side have been formed all over the world. 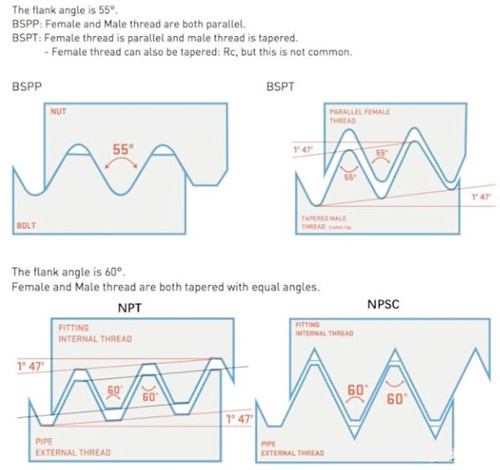 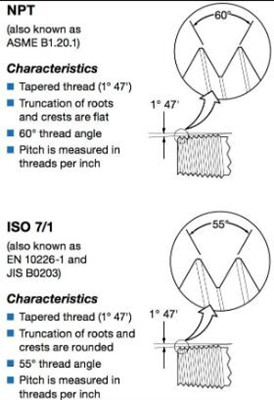 BSPT – inch tapered pipe thread, also known as Pt thread, is only used for general sealing connection. The old standard of BSPT is BS 21, but in the New Standard BS EN 10226-1, R thread is used instead.
Therefore:

Having said the two systems of pipe thread, it is easy to understand the classification and difference of various pipe threads, because R series and G thread belong to English pipe thread. 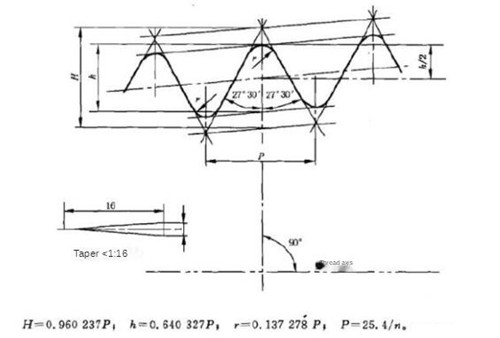 It is worth mentioning that many friends think that BSP thread refers to G thread and can be used in common. We have different views on this view.
The sealing effect of general sealing cylindrical pipe thread (RP) is realized by adding sealing filler (e.g. PTFE sealing belt) to the whole thread when necessary, while the sealing effect of non sealing cylindrical pipe thread (g) is realized by using sealing equipment (e.g. O-ring) at both ends of the thread connection or around it.
In addition, there are also differences in the usage and design tolerance between general sealing pipe thread and non sealing pipe thread. For details, please refer to the standard manual of metric, American and English screw threads.
In fact, when machining BSP threads, many machining enterprises usually encounter that the thread ring plug gauge is qualified, but the combination is poor sealing. The main reason is that the RP internal thread for sealing is confused with the G internal thread for non sealing.
Some thread codes and standards related to BSP thread:

Use a diagram to show the relationship of inch pipe thread, as follows (from tap notes). 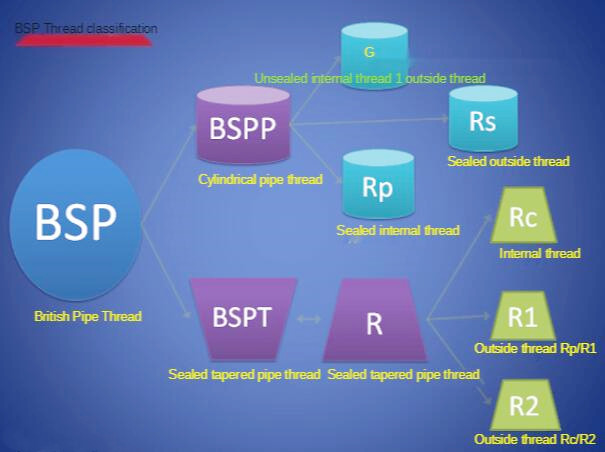 Above we understand the basic classification of pipe thread.

How to choose the thread? 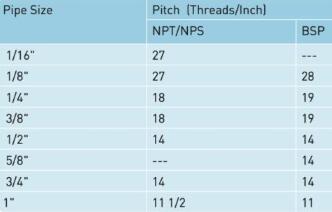 Intuitively, use the following figure to show the matching method.

For sealing: cylindrical pipe threads are generally sealed with O-ring or gasket with sealing ring, or with raw material belt, sealant, etc.
The sealing of taper pipe thread depends on the deformation of taper thread, forming extrusion force to seal. But there is always the possibility of air leakage. Therefore, for places with strict requirements, it will be sealed with raw tape or sealant.
Intuitively, the sealing method can be shown in the following figure: 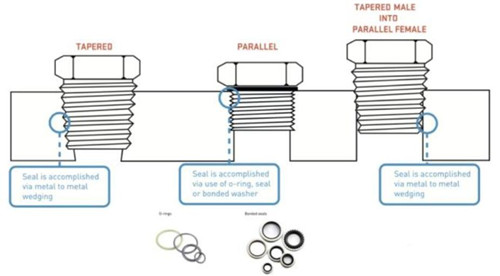 What is the global application of the two pipe thread systems?

BSPP and BSPT are Wyeth pipe threads, which are mostly used in Europe, Commonwealth countries, Australia, New Zealand, etc.
In Asia, such as China, South Korea, Japan and so on, BSPT thread is used (Japanese industry standard is called PT). Many solenoid valve products we use, and the gas interface belongs to this system.
The United States, Canada and other regions are using NPT thread.
Here’s a few more words about NPT threads.
NPT thread does not need or cannot be sealed with O-ring, because it is a conical thread, which can only be screwed in, and it can be sealed usually by thread deformation. If you want to ensure the sealing, you can use PTFE tape or loctite to seal.
It should be pointed out that NPTF = National pipe tape fuel refers to American dry sealing tapered pipe thread, including internal thread and external thread.
It differs slightly from NPT only in the apex and the base of the tooth, and the rest is the same. It is easy to mistake NPTF for national pipe thread female.
Finally, a table is used to represent the commonly used British and American threads, and another table is used to compare the commonly used threads, as follows. 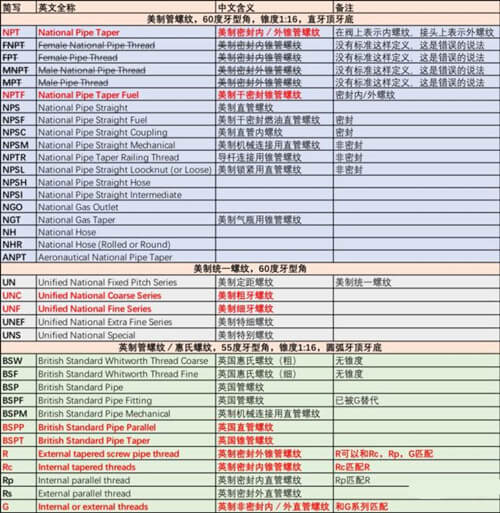 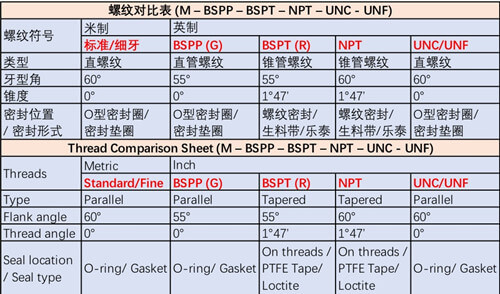