What does hardness of a material mean?

What does hardness of a material mean?

According to the different test methods, the hardness is divided into three types:
① Scratch hardness. It is mainly used to compare the hardness and softness of different minerals. The method is to select a rod with one end hard and one end soft, and then cross the tested material along the rod, and determine the hardness and softness of the tested material according to the location of the scratch. Qualitatively speaking, hard objects have long scratches and soft objects have short scratches.
② Press in hardness. It is mainly used for metal materials. The method is to press the specified indenter into the tested material with a certain load, and compare the soft and hard of the tested material with the local plastic deformation of the material surface. Because of the difference of indenter, load and load duration, there are many kinds of indentation hardness, such as Brinell hardness, Rockwell hardness, Vickers hardness and microhardness.
③ Rebound hardness. It is mainly used for metal materials. The method is to make a special small hammer drop freely from a certain height to impact the sample of the material to be tested. The hardness of the material is determined by the amount of strain energy stored (and then released) during the impact (measured by the rebound height of the small hammer).
Common HV = HB = HRC hardness comparison table 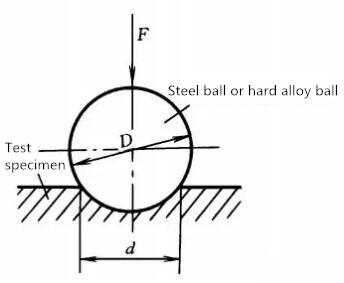 The difference between HBS and HBW is that of the indenter. HBS indicates that the indenter is a hardened steel ball, which is used to determine materials with Brinell hardness value below 450, such as mild steel, gray cast iron and non-ferrous metals. HBW indicates that the indenter is hard alloy, which is used to determine materials with Brinell hardness value below 650.
In the same test block, when other test conditions are identical, the two test results are different, and the HBW value is often greater than the HBS value, and there is no quantitative rule to follow.
Since 2003, China has adopted the international standard equivalently, cancelled the steel ball indenter, and adopted the cemented carbide ball head. Therefore, HBS is not used, and HBW is used to represent Brinell hardness symbol. In many cases, Brinell hardness is only represented by Hb, which refers to HBW. However, in the literature, HBS is still seen from time to time.
Brinell hardness measurement method is applicable to cast iron, non-ferrous alloy, all kinds of annealed and tempered steel. It is not suitable to measure the samples or workpieces which are too hard, too small, too thin and whose surface is not allowed to have large indentation. 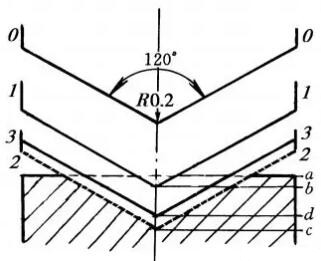 The use range of HRC scale is 20 ~ 70hrc. When the hardness value is less than 20hrc, because the conical part of the indenter is pressed too much and the sensitivity is reduced, the HRB scale should be used instead; when the hardness of the sample is greater than 67hrc, the pressure on the tip of the indenter is too large, the diamond is easy to be damaged, and the life of the indenter will be greatly shortened, so the HRA scale should be used instead.
Rockwell hardness test is easy to operate, fast and with small indentation. It can be used to test the surface of finished products and hard and thin workpieces. Because of the small indentation, for the material with uneven structure and hardness, the hardness value fluctuates greatly, and the accuracy is not as high as that of Brinell hardness. Rockwell hardness is used to determine the hardness of steel, non-ferrous metals, cemented carbide, etc.

The principle of Vickers hardness measurement is similar to Brinell hardness. The diamond positive pyramid indenter with an included angle of 136 ° is used to press into the surface of the material with the specified test force F, and the test force is removed after the specified time is maintained. The hardness value is expressed by the average pressure on the unit surface area of the positive pyramid indentation, and the mark symbol is HV. 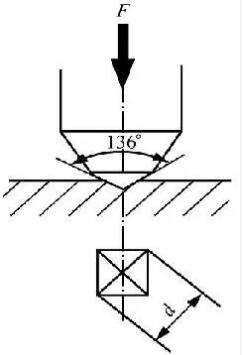 Vickers hardness can be measured in the range of 10 ~ 1000hv, with small indentation. It is generally used to measure thin materials, carburizing, nitriding and other surface hardening layers.

A certain mass of the impact body with a tungsten carbide ball head is used to impact the surface of the specimen under a certain force, and then rebound. Because of the different hardness of the material, the rebound speed after impact is also different. A permanent magnet material is installed on the impact device. When the impact body moves up and down, its peripheral coil will induce an electromagnetic signal proportional to the speed, and then it will be converted into a Leeb hardness value through the electronic circuit, with the symbol marked HL.
No worktable is needed for the Leeb hardness tester, and its hardness sensor is as small as a pen, which can be operated directly by hand. It is easy to detect whether it is a large, heavy workpiece or a workpiece with complex geometry size.
Another advantage of Leeb hardness is that the surface damage of products is very light, sometimes it can be used as non-destructive testing; hardness testing of various directions, narrow space and special parts has unique characteristics. 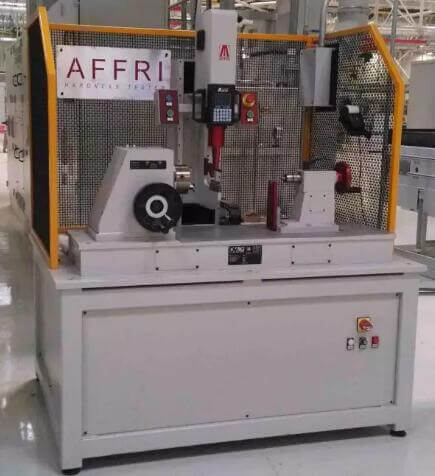 What affects the hardness of a metal?

The factors that affect the mechanical properties of metal are varied. For instance, yield strength, hardness, the ductile-brittle transition temperature, and susceptibility to environmental conditions are all affected and can be improved, by altering the grain size.

What is the hardest metal?

Tungsten (1960–2450 MPa)
Tungsten is one of the hardest metals you will find in nature. Also known as Wolfram, the rare chemical element exhibits a high density (19.25 g/cm3) as well as a high melting point (3422 °C/ ​6192 °F). In its rare form, tungsten is hard to work with due to its brittleness which can be changed when turned pure. Tungsten is often utilized to create hard alloys, such as high speed steel to increase protection against abrasion as well as improve electrical conductivity.
Iridium (1670 MPa)
Like Tungsten, Iridium is a chemical element that shows signs of high density and a tolerance of high temperatures. Iridium belongs to the platinum group metals, resembling platinum in its look. However, iridium is hard to work with. Since it is very hard, iridium is also quite brittle which is only aggravated by its very high melting point of over 2,000°C. Iridium ranks among one of the rarest Elements on Earth’s surface as well as one of the most corrosion-resistant elements.
Steel
Steel is an alloy metal made of iron and other elements, such as carbon. It is the most used material in construction, mechanical engineering, and other industries. Due to the many variations and levels of quality steel can adopt, there is no uniform hardness value. There exist many different techniques of tempering steel to improve the wear protection of steel, heat tolerance and protection against abrasion. Borocoat for example optimizes the hardness of steel without making it brittle. Find out more about boronizing and Borocoat.
Osmium (3920–4000 MPa)
Osmium belongs to the platinum group metals and displays a high density. In fact, it is the densest, naturally occurring element on Earth with 22.59 g/cm3. This is also why Osmium does not melt until 3033 °C, a temperature that makes it difficult to work with the metal. When it is alloyed with other platinum group metals (such as iridium, platinum and palladium) it can be used in many different areas where hardness and durability are needed.
Chromium (687-6500 MPa)
Chromium is an element often found in alloys, such as stainless steel. On the Mohs scale, which measures scratch resistance, it is found among the top. Chromium is valued for its high corrosion resistance as well as its hardness. Since it is easier to handle as well as more abundant than platinum group metals, chromium is a popular element used in alloys.
Titanium (716 to 2770 MPa)
Titanium is known for its strength. While it does not quite compare to other any other metal on this list in terms of Brinell Hardness, titanium has an impressive strength to weight ratio. Even in its pure form, titanium is harder than many steel forms. As a refractory metal, it is highly resistant to heat and abrasion which is why titanium is a popular alloy metal. It can be alloyed with iron and carbon.

What determines a material’s hardness?

In the example you mention much of the hardness is due to the nature of the atomic bonding within the material. Before proceeding it is important to point out that diamond and graphite are both made purely of carbon and that the differences in their properties arise mainly from the structure and bonding of the carbon atoms in these materials. These structural differences can explain differences in hardnesses of many materials but often there are other factors that go into determining a materials hardness.
For diamond, each carbon atom binds to four other carbon atoms in a very specific tetrahedral arrangement. When a lot of these carbon atoms bind together an extended network of carbon atoms is created. Essentially, an extended network can be thought of as a single, very large molecule which makes diamond extremely resilient because all of the carbon atoms are in a way, “locked together.”
With graphite, the carbon atoms only bind to three other carbon atoms in a planar, trigonal arrangement. When these carbon atoms bind together they form sheets that sort of stack on top of one each other and are only held together by weak forces between the layers. The fact that the carbon is present as a sheet means that the carbon atoms are not “locked together” as they are in diamond and can slide over one another.

What is hardness and what are the different types of hardness associated with materials?

Hardness refers to the resistance of a material’s surface to indentation or scratching. Different hardness scales include Rockwell C & B (metals), Brinell (ball indenter, metals), Vickers (diamond shaped indenter), Knoop (diamond shaped micro-indenter), Meyer (rarely used), Shore A & D (rubber & softer plastics) and Mohs (minerals). Each is measured by pressing an indenter into the test specimen and determining the depth or width of the resulting impression or by testing the relative scratch resistance when a point is dragged across the surface of the specimen. Some measures can be used to derive an indirect measure of tensile strength based on tabulated data. There are useful tables of hardness equivalence between the different scales. Some scales such as Mohs and Shore are highly non-linear. You may look each one up in Wikipedia for more detailed discussion.