The petroleum pipeline is composed of the oil pipe and its accessories, and is equipped with the corresponding oil pump unit according to the needs of the process flow. It is designed and installed as a complete pipeline system for completing the oil material loading and unloading and transportation tasks.

By types of crude oil

The composition of the piping system 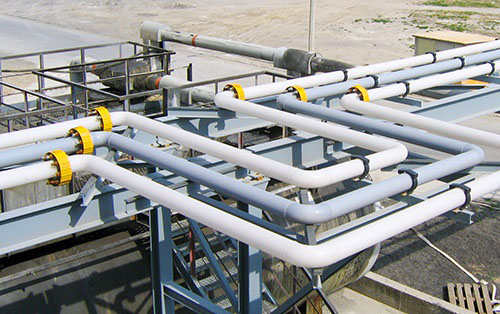 Materials and specifications
Pipe and suitability

The petroleum pipeline must use a certain link to form a complete system. Pipes are mainly connected by thread, welding and flange connection. The pressure is not high, and the pipe with small pipe diameter can be connected by the method of thread. This connection method is convenient, but since the diameter of most main petroleum pipelines is generally large, the other two connection methods are often used. Pipes with DN ≥ 50 are basically connected by welding. The welding has the advantages of convenient construction, firmness, strictness and steel saving. Generally, the parts that do not need to be disassembled in straight pipe or curved road can be used. Flange connections are made between pipes and valves or other equipment (eg pumps) and where the pipes need to be removed. To ensure the tightness of the flange joints, relatively soft flanges are required on both sides of the flange. The washer assists. Flanges can be divided into flat welding, threading, butt welding, loose sleeves and blind plates according to the production process. Except for blind flanges, they are used for connecting pipes. If you need to connect different diameters. For the pipeline, the diameter flanges corresponding to the two diameters can also be used. The blind flange is used for the closing of one end of the pipe head and is therefore designed to withstand large bending stresses.

A valve is a mechanical device used to open, close, or control the flow of media within a pipe. There are many types of valves and there are many ways to classify them. If divided according to the purpose, it can be divided into cut-off valve, check valve, distribution valve, etc.; if divided by pressure can be divided into vacuum valve (working pressure is less than standard atmospheric pressure), low pressure valve (PN ≤ 1.6MPa), medium pressure valve (PN =2.5—6.4MPa) and high pressure valve (PN=10-80MPa). According to the driving method, it can be divided into manual valve, power driven valve and automatic valve, as well as different classification methods according to temperature or material. The gate valve is equal to the valve base and the valve plate. The valve plate moves vertically up and down with the valve stem through the hand wheel, thereby cutting or opening the pipe, and at the same time adjusting the opening ratio of the pipe. Due to the characteristics of the ram, the gate valve is mostly fully open or fully closed during normal application, and is less used for flow regulation, but the gate valve has the advantages of good sealing performance and convenient maintenance. The spool of the shut-off valve falls vertically on the base, the valve seat is parallel to the centerline of the pipeline, the fluid flows in the “S” shape in the valve body, and the fluid resistance is large. The shut-off valve is generally used for flow regulation, and has convenient manufacturing and maintenance. A little bit, but it is easy to leak when closed, and the sealing is not as good as the gate valve.
In the laying of long-distance pipelines, valves shall be installed along the line, and the spacing shall not exceed 32km. If the pipeline passes through sparsely populated areas, it may be appropriately relaxed. Valves shall be provided along the buried petroleum pipeline along the ends of pipelines that span large rivers, lakes, reservoirs, and densely populated areas such as towns or as deemed necessary by topographical conditions. The location of the shut-off valve shall be free from geological disasters and floods, and shall meet the needs of convenient transportation and convenient maintenance, and shall be provided with protective facilities.

Because the causes and conditions of pipeline corrosion are not the same, pipeline corrosion protection has the following different methods according to different corrosion conditions: reasonable material selection, different types of materials are selected according to different transportation media and environmental conditions; cathodic protection is external DC The power source is protected by the fact that the pipe metal originally being the anode itself becomes a cathode, or a metal having a relatively more active chemical activity is attached to the pipe so that the two constitute a primary battery, and at this time, the more active metal is corroded. The pipe itself is protected; the medium treatment includes removing the corrosive components of the medium or adjusting the pH value; adding an anti-corrosion coating (such as paint) on the metal surface to isolate the steel pipe from the oxygen in the air, This achieves the protection effect; the addition of “corrosion inhibitor”, corrosion inhibitor is a special additive added to metal equipment for mitigating corrosion. It is an anti-corrosion technology for pipelines and other fields due to its small dosage, low investment and obvious effects. The key development direction, the corrosion prevention principle of corrosion inhibitor can be described as anti-catalysis, that is, and chemical industry students Instead catalyst principles used, corrosion inhibitor will increase the activation energy required for a chemical reaction, in order to slow down the rate of corrosion reaction occurs.

Common piping arrangements are as follows:

In the single pipe system, double pipe system, and independent pipeline system, the pipeline is laid. In order to reduce the resistance, the method of straight line laying is generally adopted. There are three types of ground, pipe ditch and underground. The pipes within the oil depot wall should be laid on the ground. The pipes that have been buried underground or the pipes that have been laid in the pipe trenches should be combined with the technical transformation of the oil depots, and should be gradually changed to the ground as much as possible, and the oil pipelines outside the fences should not interfere with traffic and occupy farmland. Generally, the pipeline is directly buried in the ground after being treated with anti-corrosion treatment, and the depth is 0.5~0.8m.

The earliest crude oil pipeline built in China is the Karamay-Dushanzi crude oil pipeline, which is referred to as the ke-only crude oil pipeline. The pipeline is 147.2 kilometers long, with a diameter of 159 mm, a design pressure of 7.0 MPa, and a conveying capacity of 530,000 tons per year. It was completed and put into operation in January 1959.

The longest crude oil pipeline in China is the western crude oil pipeline. The pipeline starts at the first station of Wangjiagou in Urumqi and ends at the end station of Lanzhou. The trunk line is 1858 kilometers long, with a diameter of 813 mm, a design pressure of 8 MPa, and a designed transmission capacity of 20 million tons per year. It was completed and put into operation in June 2007.

The crude oil pipeline with the largest diameter in China is the Rizhao-Yizheng crude oil pipeline. The pipeline starts from Rizhao, Shandong Province, south of Jiangsu Yizheng, with a length of 390 kilometers, a diameter of 914 mm, a design pressure of 8.5 MPa, a recent design transmission of 20 million tons/year, and a long-term design of oil transportation of 36 million tons/year. It was completed and put into operation on October 10, 2011, and the oil products imported were crude oil imported from the sea.

Canadian oil pipelines are also well developed. In 1980, the length of the refined oil pipeline reached 4,800 kilometers, which was almost 1.5 times increased from the 1960s to the 1980s. The product tubing network runs from west to east across Canada’s industrially developed and densely populated areas. Canada’s largest refined oil pipeline is an inter-provincial pipeline with a length of more than 6,000 kilometers, a maximum diameter of 864 mm, and a delivery of up to 65 kinds of oil. The refined oil is exported to the United States in addition to the foreign supply.

• How to get high quality alloy steel pipes

• HOW TO GET HIGH QUALITY STEEL PIPES

• How to get high quality carbon steel pipes

• How To Distinguish Inferior Steel Pipe

• HOW TO GET HIGH QUALITY BOILER TUBES

• What is the Meaning of API 5L Pipe

• What is seamless carbon steel pipe

• What is DSAW steel pipe

• What is a natural gas pipeline