It is often asked that the shape of I-beam is similar to that of H-beam. How to choose it in practice? Many people who have been engaged in the construction industry for many years cannot explain it in detail.

Table of Contents hide
1 What is I-beam?
1.1 What are I-Beams used for?
2 What is H-beam?
3 Difference and application of H-beam and I-beam?
4 Manufacturing of Beam

Here’s a detailed answer for you: many people think that I-beam is called in China and H-beam is called in foreign countries. In fact, this cognition is wrong. H-beam and I-beam are different in shape, as shown in the following figure: 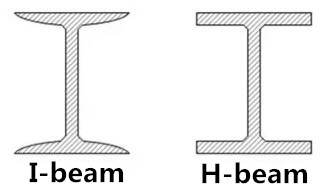 I-beam, also known as universal beam, is a long steel with I-beam section. I-beam is divided into ordinary I-beam and light I-beam. It is a I-section steel.
I-beam is mainly divided into ordinary I-beam, light I-beam and wide flange I-beam. According to the height ratio of flange and web, it can be divided into wide, medium and narrow flange I-beam. The first two specifications are 10-60, that is, the corresponding height is 10 cm-60 cm.
At the same height, light I-beam has narrow flange, thin web and light weight. Wide flange I-beam, also known as H-beam, is characterized by parallel legs and no inclination inside the legs. It belongs to economic section steel and is rolled on four high universal mill, so it is also called “Universal I-beam”. Ordinary I-beam and light I-beam have formed national standards.
As shown in the name, I-beam is a “I” section steel. The inner surface of the upper and lower flanges has an inclination of 1:6, which makes the outer flange thin and the inner flange thick. As a result, the cross-section characteristics of I-beam in the two main planes are greatly different, which is difficult to play in the application.
Strength characteristics. Although I-beam is also thickened in the market, the structure of I-beam has determined its short plate of torsional resistance.

What are I-Beams used for?

I-beams have a variety of important uses in the structural steel construction industry. They are often used as critical support trusses, or the main framework, in buildings. Steel I-beams ensure a structure’s integrity with relentless strength and support. The immense power of I beams reduces the need to include numerous support structures, saving time and money, as well as making the structure more stable. The versatility and dependability of I-beams make them a coveted resource to every builder.
Commonly termed an “I” beam because of its shape, beams provide great load bearing support when used horizontally or standing as columns. I-beams are the choice shape for structural steel builds because the I-beam makes it uniquely capable of handling a variety of loads. The shape of I-beams makes them excellent for unidirectional bending parallel to the web. The horizontal flanges resist the bending movement, while the web resists the shear stress.
Understanding the I-beam is a basic necessity for the modern civil engineer or construction worker. Engineers use I-beams widely in construction, forming columns and beams of many different lengths, sizes, and specifications.
An I-beam is made by rolling or milling steel which means the I-beam is often limited by the capacity or size of the milling equipment.
I-beams come in a variety of weights, section depths, flange widths, web thicknesses, and other specifications for different purposes. When ordering I-beams, buyers classify them by their material and dimensions. For example, an 11×20 I-beam would have an 11-inch depth and a weight of 20 pounds per foot. Builders choose specific sizes of I-beams according to the needs of the particular building. A builder has to take many factors into account, such as:

Difference and application of H-beam and I-beam? 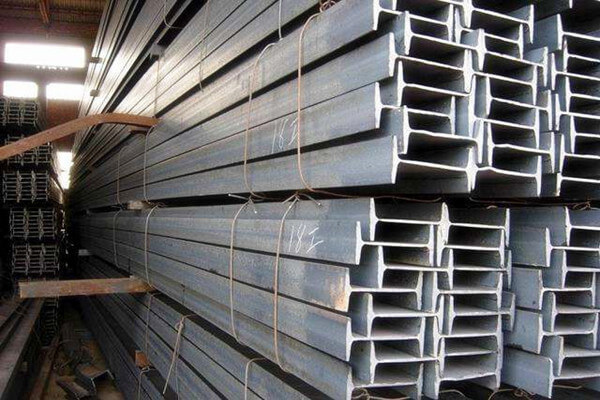